CELEBRITY Q&A SESSION WITH JAMES MARSTERS
6:30 PM, ROOM 210AB
James Marsters will is beloved forever by fans of “Buffy the Vampire Slayer” and “Angel” for his unforgettable role of Spike. Since the end of those series Marsters has appeared in many guest starring roles on shows such as Torchwood, Caprica and Smallville.

CELEBRITY Q&A SESSION WITH GEEK & SUNDRY'S FELICIA DAY
12:30 PM, 210AB
Felicia Day is the star, writer, and producer of the original web series The Guild, and Executive Producer of Co-optitude, LARPs, TableTop and other shows of the Geek & Sundry channel on YouTube. She is one of the most successful YouTube pioneers, launching many new careers and influencing an entirely new format of entertainment.

CELEBRITY Q&A SESSION WITH SCI FI IT GIRL ELIZA DUSHKU
4:00 PM, MAIN THEATER
Eliza Dushku is known for starring as Faith on Buffy the Vampire Slayer and its spinoff series Angel. Don’t miss her Q&A as she discusses her role on the show now celebrating its 20th anniversary! 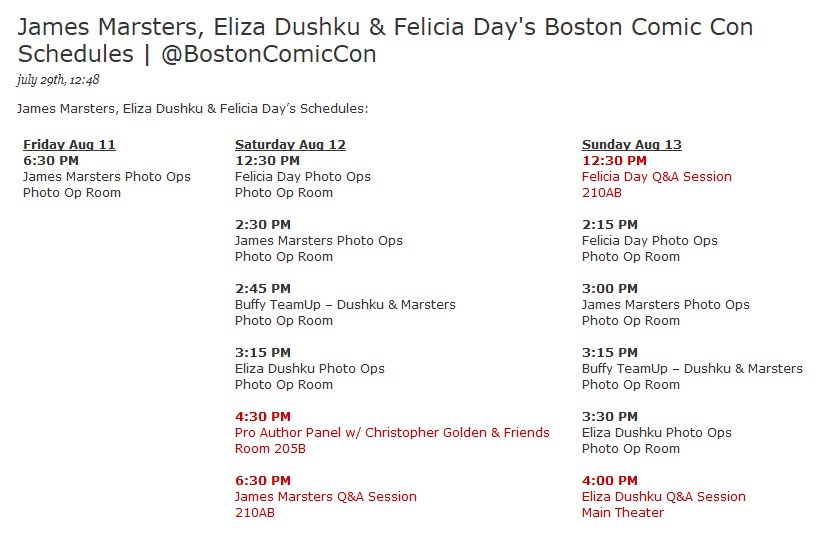