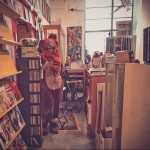 James Marsters has been haunting our dreams ever since his career defining role as the vampire Spike on the cult classic turn of the 21st century TV show Buffy the Vampire Slayer. On our recent Runaways set visit, we got to talk to James about his role as the abusive and tortured genius Victor Stein. The fan favorite actor also opened up to us about his career and gave us an insight into his process for creating empathetic and nuanced villains.

Like many of the cast, James hadn’t come across Runaways before he auditioned. But unlike many of his colleagues he hasn’t made any attempts to read the source material since he was cast. “I haven’t read them [the Runaways comics] since I got the role because I think it’s really important to give my Victor and not try to do an impersonation of someone else’s,” Marsters told us. Though he hasn’t read Runaways, he was inspired by an astounding performance in another recent adaptation of a beloved Marvel comic. “He [Vincent D’Onofrio] did a Kingpin that so surprised me. It was in so many ways exactly opposite of what I was expecting, of what I’d read in the comics. In the comics, Kingpin is always charming. He’s an extrovert. He’s in control of any social situation. And in private he’s mean and that’s the contrast. Vincent just flipped it 180° and went for the vulnerabilities and the insecurities in the character. He was able to bring out a sophistication that you can’t get in a static image,” James enthusiastically explained.

Victor and Chase of the Runaways comics have a strained relationship, one heavily damaged by Victor’s history of abuse and obsession with Chase’s potential. For Marsters, his interpretation came from a place of Victor being a flawed person rather than an evil one. “For Chase, I want the same thing that every parent wants for their child, which is for their child to reach their potential. Chase is a genius. He has an IQ that surpasses technical genius level, and Victor is the same. And I think he recognizes that his son is every bit as smart as he is. Chase is not necessarily living up to his potential at this point, so I’m pushing him. And sometimes being a good parent is allowing yourself not to be liked,” Marsters expanded. Marsters has spent most of his life portraying villains and his approach for getting in the heads of bad guys is a personal one. “I think the most important thing when I play any character is to recognize that I’m like that. I’m not an abusive parent but I’m not a perfect parent. I don’t think anyone is. Victor is trying to make his child the best that he can be, and I think that he’s not perfect in doing that,” Marsters said. “The thing that I love about acting is that for me, it’s an empathy machine. I’ve played so many villains. I’ve been forced to feel empathy for people who’re making huge mistakes. I don’t think there are villains in this world, I think there are human beings who are hurting each other. Sometimes with the best intentions. Sometimes we really are less than our best selves, and to be able to recognize that and not judge the huge mistakes that my character is making is a challenge but also a gift,” James revealed.

Despite Victor Stein’s sinister relationship with the younger generation in Marvel’s Runaways, James Marsters only has glowing praise for the show’s young cast. “First of all, they’re a group of immensely talented actors, kind of astonishingly good at their age, actually. They’re all really grounded, good people,” Marsters said.

Are you excited to see Victor brought to life on the small screen? Excited to see Marsters create another iconic antagonist? Let us know in the comments!