‘Marvel’s Runaways': James Marsters on Reality of Lying to Kids — Even If It’s Not About Being Evil

‘Marvel’s Runaways': James Marsters on Reality of Lying to Kids — Even If It’s Not About Being Evil 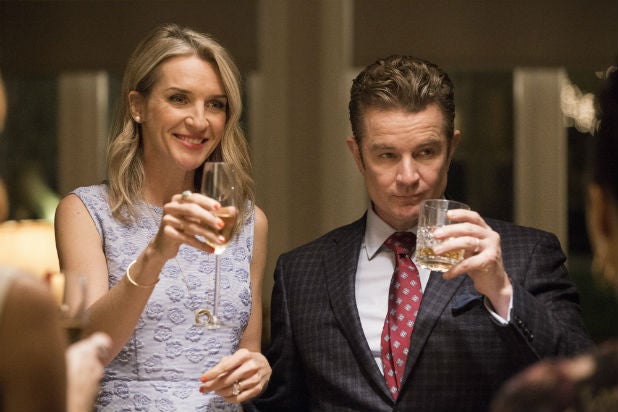 James Marsters will readily confess to the difficulties of being a parent. But it wasn’t until he started shooting Hulu’s new series “Marvel’s Runaways” that he got a taste of how much harder raising a kid could be — if you’re evil and super powers are involved, that is.

In “Runaways,” Marsters plays tortured genius Victor Stein, father to Gregg Sulkin’s character Chase — one of the six teens on the show who band together after realizing that their parents have been lying to them all their lives about being evil.

So, yeah, Marsters is playing a bad guy on the series, which is based on Marvel’s 2003 comics by Brian K. Vaughan– something he’s all too familiar with after portraying rebel vampire Spike for years on “Buffy the Vampire Slayer.” But lying is something he’s familiar with too, especially being a parent.

To be clear though, Marsters isn’t lying about being evil. He’s lying about what all parents lie about: things that will hurt their kids.

“This is what happens when you’re a parent,” Marsters tells TheWrap. “There is this case that opens up, it starts with Santa Claus. It happens for the best of reasons. Like, you might have come home from the doctor, who said, ‘We don’t have the test back yet and we’ll let you know if you have cancer.’ And your kid asks you, ‘What’s wrong, Dad? You look a little tense.’ What you don’t say is, ‘I don’t know if I have a serious medical issue’ or ‘I don’t know if i can make rent.’ So parents lie to their kids a lot. They are trying to protect them from reality.”

“Also a lot of times parents end up doing things that are less than moral to try and put the food on the table and they don’t wanna admit these things to their kids and they are doing them for the best reasons,” Marsters says. “So ‘Runaways’ is exploring that story and turning all of that up to 11. And then you are adding super powers to that.”

“The show has a dynamic about it where anyone who is a teenager on the show can recognize these things in their own lives,” Marsters says of the series. “And it is certainly something I can recognize as a parent too.”

.@runaways @JamesMarstersOf on Reality of Lying to Kids -- Even If It's Not About Being Evil https://t.co/rDPqk6tq4J pic.twitter.com/qarJXX6nGA