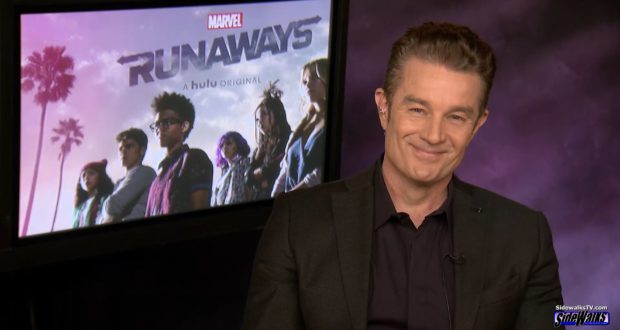 Fan favorite James Marsters returns to our show. The man known as Spike talks about his memories of “Buffy the Vampire Slayer” and his latest gig on “Marvel’s Runaways,” now streaming on Hulu.

Video Content: James Marsters (2017)
SIDEWALKS host Lori Rosales welcomes back returning guest James Marsters. They talk about growing up in Modesto, CA, playing Spike on “Buffy the Vampire Slayer” and his favorite moments, and his new role as a villain in “Marvel’s Runaways” on Hulu.

Mini-Biography:
Born in Greenville, California and raised in Modesto, James Marsters is best known as Spike, a vampire in the TV series “Buffy the Vampire Slayer” and spin-off series, “Angel.” Some of his other notable roles are Brainiac on “Smallville,” time traveller Captain John Hart in three episodes of “Torchwood,” Barnabas Greeley in “Caprica,” and Victor Hesse in the revival series, “Hawaii Five-0.” His guest starring roles include “Northern Exposure,” “Andromeda,” “Saving Grace,” “Numb3rs,” “Supernatural,” and “Warehouse 13.” Marsters was also in films “P.S. I Love You,” “Dragonball Evolution,” and “Moonshot: The Flight of Apollo 11.” Besides acting, Marsters has played in bands, including as the lead singer of Ghost of the Robot.