Back in the day James Marsters' old official websites used to post a monthly Q&A session with James, & I'm reposting those Q&As every week for a bit of fun (& nostalgia)! Enjoy this week's Q&A from April 2006: 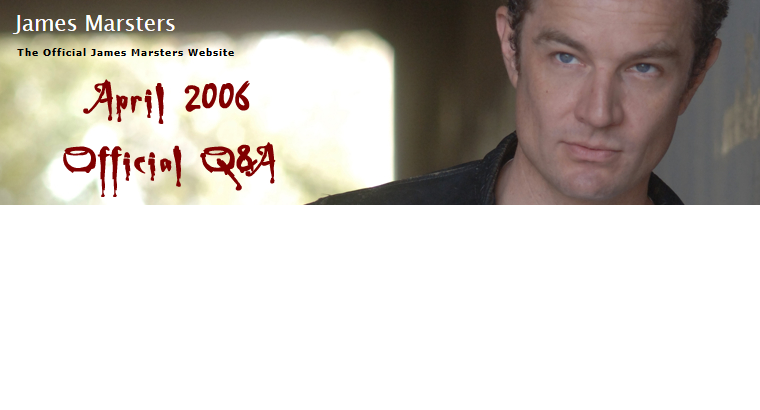 Do you have any advice for people who suffer from stage fright/public speaking?

Stage fright is a very natural reaction – everyone has it. In the animal world, creatures only stare at each other when thinking of eating each other, so it’s natural to run away. But, as a good acting teacher once told me, “acting is being private in public.”

How would you describe yourself in three words and why those three?
I’m just getting to know myself. I’m no where near to being concise about it yet. I can’t define myself. Wait a minute – I’m angry, I’m funny and I’m trying.

You’ve played in clubs that buzz with high energy, but also are filled with loud people who talk and laugh all through your performance – and you’ve played in the quieter environments where the audience is seated, but who enjoy your performance with the hush of a true listening audience. As an audience member, I’ve experienced the pros and cons of both loud and quiet audiences – as an artist, which do you feel most connects your art with your audience and do you prefer one over the other?
I love being able to hear myself clearly in a quiet house so I can really tell if I’m sucking or not. But really my job is to give permission for the audience to exalt and lose control. I also felt that we got a little higher with the louder crowd.

Do you think that Shakespeare’s plays have been modernized and performed so much that it would be hard to direct or perform in an original adaptation without the audience saying they’ve seen it before? How much pressure is on the actors and director to create an exciting and original piece of theatre?
I always argue for not straying from the text. I don’t like Shakespeare productions on Mars! Romeo and Juliet should be set in Verona and at the time dictated by Shakespeare. Shakespeare had a 700 year history to draw from, he had good reason to choose the places and times he did. I feel no pressure to come up with something original but rather to just be true to Bill Shakespeare. I am a slave to Shakespeare’s original intention!

Not really referring to historical or well-known figures, but rather just ordinary, average people, what in your opinion makes an individual particularly brave or courageous?
Overcoming their fears. All heroes quake with fear, they just choose to keep on going.