Back in the day, James Marsters' old official websites used to post a monthly Q&A session with James, & I'm reposting those Q&As every week for a bit of fun (& nostalgia)! Enjoy this week's Q&A from May 2006: 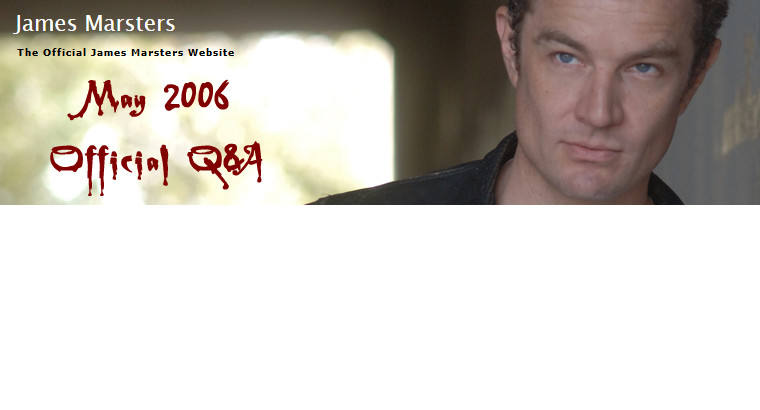 You do such a beautiful job portraying the women in the Dresden audio books. How did you approach these characters emotionally and vocally?

Emotionally it’s very easy to portray a woman because women are human beings just like me, so there’s not a big need to change the internal. That’s the lesson that Shakespeare taught me early on. Shakespeare wrote great women because he wrote great human beings and then cast great transvestites to play them.

Can you explain the different responsibilities of a manager, an agent, and a publicist, and do you have one of each?

An agent gets you the auditions and opportunities. A manager evaluates the opportunities and helps oversee the total career. A publicist handles your image in all forms of the public eye. Yes, I do have all of these people in my professional life.

In season 5 of Angel, Joss was excited about an episode that had Spike in a dress. He even references it in his WB letter on their website. But in the final version of the episode, the scene wasn’t included. Can you tell us if it was filmed and if so, why it wasn’t included. If it wasn’t filmed, do you have any idea why?
The reason was that Steve DeKnight and I were drowning in the toilet trying to complete this episode (I can’t remember the title – the only one he directed that year). I tried to make it work but it would have doubled the amount of work that day to have my character change from the black coat to a dress. Pitifully, it was a money issue.

I recently saw a play in a restored theater that is over 150 years old and I felt a strong sense of its history and of all the audiences who had gone before. Does a certain venue or environment have any influence on acting or are you more concerned with your preparation and the people you are collaborating with creating a world within that environment, but not necessarily connected to it?

Every good director respects the space that he is working in. The same play can be changed radically by taking it on the road into different spaces. My favorites, like most actors, are the old spaces because you are right – all the people have left their mark on that space. You can almost smell them. Sometimes you see their ghosts. (Corny but true)

Describe your average day. For example, what did you do today?

I have no average day. At least 3-4 times a month I wake up in a different place than the day before. Within the past week I’ve been in L.A., Northern California, and Germany. I bought a new home, but still don’t feel moved in. I’m looking forward to having an average day.

What does ’seven lonely oceans’ refer to in your song Bad? I’ve never really understood that lyric.
I was trying to find a phrase that described my lover’s deep pain and beautiful mystery. The ocean is probably the most recurring image in all of my songs. I talk about that a lot.

You said in one interview that you believed Shakespeare believed in equality, that he was very modern-minded when it came to the relations between men and women. How then do you interpret Taming of the Shrew?
Kate is not a shrew. She’s just smarter than everyone else. She’s wiser than everyone else and cannot find her equal until Petruchio shows up. He is her equal and it’s delightful to watch him prove that – it’s a happy ending to watch two people find their equals.