Back in the day, James Marsters' old official websites used to post a monthly Q&A session with James, & I'm reposting those Q&As every week for a bit of fun (& nostalgia)! Enjoy this week's Q&A from June 2006: 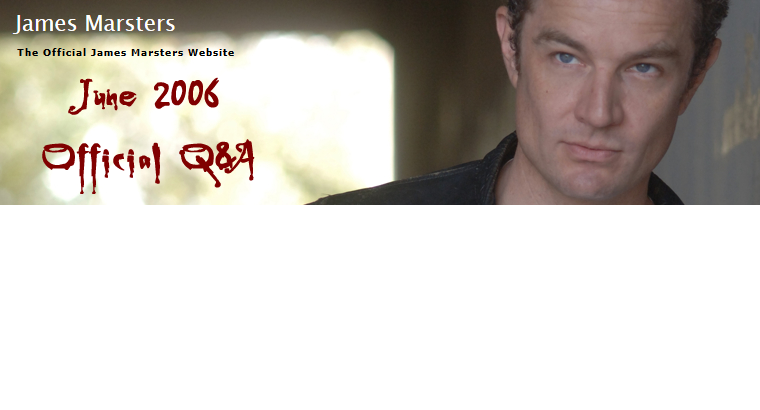 What do you do when you find yourself working with an actor who gives you nothing to play against?
Good question. Unfortunately there is no other fix than to take what the actor is giving you. You can’t pretend they are doing something else. You just have to again cleave to your objective and try to wring something out of that person no matter how boring they might be.

Spike was written as being a nit with both women and diabolical plan execution. But he seemed to be an intuitive and shrewd observer of people when it came to calling them on their crap, as in the “you’ll never be friends” speech to Buffy and Angel, knowing just how to set the Scoobies against each other, or understanding that Buffy was really mad at herself when she played ‘kick the Spike’. Can you talk about that contradiction in his personality, how it was written and how you decided to play it?
I love contradictions in characters and you are right – sometimes Spike would seem very dim and sometimes he would border on wise. But I recognize myself in that too.

When directing/playing Macbeth, is it your intention to make the audience sympathize with the main character?
That is always the intention of story-telling. One hopefully always sympathizes with the lead in a play. I think Shakespeare wanted us to recognize that Macbeth is just like us even when he takes himself into hell. He goes to hell because he is ambitious, but who amongst us isn’t?

Why did you change the title of Runaway to No Promises?
(Laughs) Because everyone kept singing the chorus. I keep hearing people singing ‘please, no promises.’

When you write a new song, does it come from an idea that you have, or an emotion? Along those same lines, if you absolutely had to choose, would you prefer a project that made the audience feel or made them think?
In the world of music it’s definitely how you make them feel. I can name 25 albums that have had a major impact on how I view the world, but that all started from an emotional truth that the music spoke to. Music runs afoul when it gets too intellectual. If you compare Radiohead’s Hail to the Thief to Marvin Gaye’s 1970’s protest album What’s Going On you’ll see what I mean. Marvin got to the simple emotional truth about war’s ability to smash love and is a better anti-war statement than Radiohead has yet devised. If you look at the Sex Pistol’s monster album, Never Mind the Bollocks, you find an incendiary treatise on the sustained class warfare that the rich have been waging on the working class in England for as long as anyone can remember, yet they made that point in a simple screaming, raging statement “No future for me!”

If we looked in your refrigerator, what would we see?