Back in the day, James Marsters' old official websites used to post a monthly Q&A session with James, & I'm reposting those Q&As every week (I did skip last week due to the awesome Angel 20th anniversary coverage!) for a bit of fun (& nostalgia)! Enjoy this week's Q&A from July 2006: 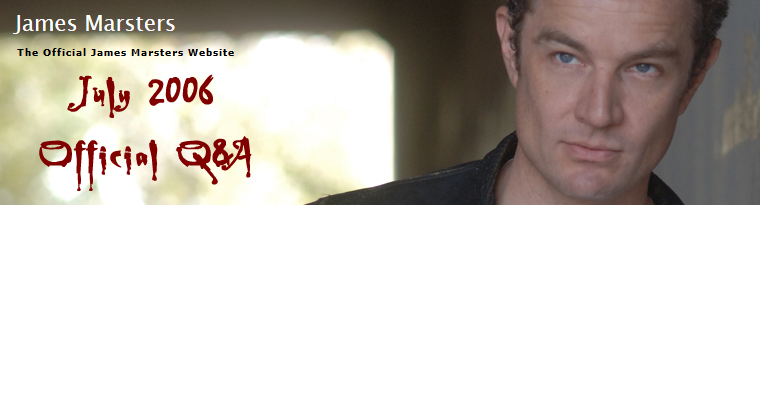 What is your least favorite:
Color – I love all color
Sight – Human cruelty
Smell or scent – Rotten meat
Taste or flavor or spice – The piece of candy corn that pushes me over the mountain of sugar rush into the chasm of nausea; worse than that is the 40 I eat after that!
Food – Boiled lima beans. I ate too many before the age of 18. I’ve never had one since.
Thing to feel (touch) – A chalk board
Thing to feel (emotion) – Fear
Time of day – Morning! Morning! Morning!
Month – There are only twelve of them so I can’t be that picky. I love them all.
Word or expression – ‘for your information’ and ‘didn’t you get the memo’
Chore, thing to do which has to be done anyway – Watching the President’s speeches

How would you describe your character in Shadow Puppets? Is this movie based on a novel?

He is intelligent, terrified and although you wouldn’t first suspect, love-struck. It is an original concept.

What would the music be like for the Macbeth movie you are planning?
Hmmm, ummmm, uhhh… low orchestral, traditional Celtic war music and synthesized screeching in the chilly parts. It would be a horror film – I think one of the best horror stories ever told. Make no mistake, it is a slasher film.

What song(s), artist(s), or both get you in that place where you can just close your eyes, put your head back, and let the world fall away – when you let yourself be totally absorbed by the music?
I don’t listen repeatedly to music unless it can cast a spell like that. I’ve mentioned in the past Nick Drake, Joni Mitchell and Tom Waits – to that I would add, in a very different way, Ry Cooder, and especially recommend an album he produced in Cuba called Buena Vista Social Club. It’s not a new album, but widely available and absolute magic.

If you were going to ’sell’ only one of your favorite musicians to someone who’d never heard of him/her, which musician would it be and what would you say to convince that person to listen?
Nick Drake and his album Pink Moon. Nick died weeks after recording it and it truly sounds like it’s too beautiful for this world.

In your opinion, what are the three most important emotional characteristics you need in a friend?
Forgiveness, truthfulness, and patience.