Back in the day, James Marsters' old official websites used to post a monthly Q&A session with James, & I'm reposting those Q&As every week (I skipped last week due to James & Sullivan's 4th of July Facebook Live) for a bit of fun (& nostalgia)! Enjoy this week's Q&A from August 2006: 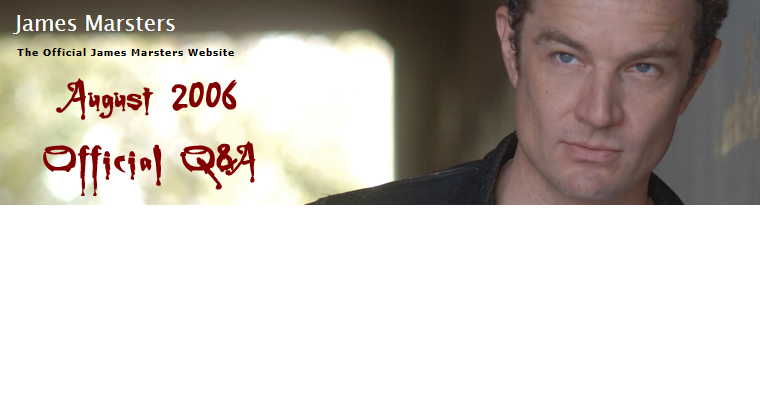 Do you generally stay in character on the set and if so, how far do you take it? If you don’t, how do you stay focused through the long periods of waiting in between shots/scenes?
I find it best to drop character and then leap without looking back into the scene. This sometimes surprises me and things happen that I didn’t plan.

If you could change one thing about Spike, what would that be?
He would have achieved something for himself, even something small.

I’ve heard that when you had your own theatre company, you wrote your own plays at times. What did you choose to write about, and why?
I didn’t write my own original material. We adapted from short stories, we re-translated from old works, and I also helped young playwrights through the process of original works. I was most proud of Calderon’s Life is a Dream, a 17th century Spanish masterpiece equivalent to Hamlet but little known in the English speaking world, and an original piece called I Might Be Edgar Allen Poe.

What do you do when you get stuck while you’re writing? In other words, what’s your cure for writer’s block?
Let it go and it will come. It’s like a bird – it will fly right away but it will come right on your shoulder when you’re not even asking for it. It’s a mistake to try to force your creative mind with your intelligence. The best thing to do if you are blocked is to find something that is fun.

If money was no object, what would you buy?
A small Lear jet. I spend a lot of time driving. I drive half-way around the earth every year.

You say you are a slave to Shakespeare, but are there any other English playwrights that you admire so passionately? Do you prefer the atmosphere of English theatre or American theatre and why?
I haven’t seen enough English theater to give a preference. I’m a slave to any good playwright, or as any actor would say, a servant to any good text. Another good English-verse playwright is Christopher Fry. One contemporary of Shakespeare’s in Spain was Calderon, arguably Shakespeare’s only equal. Steven Berkoff is a fabulous English playwright, but my favorite right now is an American, John Olive.