Back in the day, James Marsters' old official websites used to post a monthly Q&A session with James, & I'm reposting those Q&As every week for a bit of fun (& nostalgia)! Enjoy this week's Q&A from November 2006: 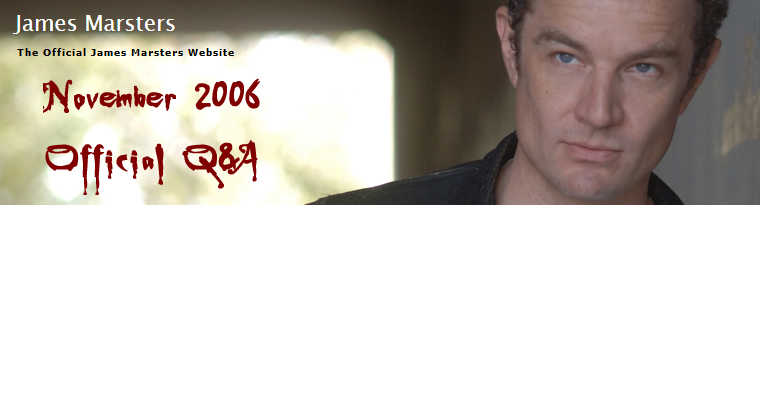 Is there any living creature (mammal, reptile, insect, fish, etc.) that just completely gives you the willies?
The Tasmanian devil. Their cries in the night will make the hairs on the back of your neck stand up and leap off your neck. They have very powerful jaws and the sounds of them breaking bone from the carcass of their kill can literally be heard for miles.

When Clark was telling Professor Fine about his suspicions about the sorority girls, Fine says….”But Clark, there is no such thing as vampires.” Was that written by the Smallville writers as a special homage to Spike?
That was written by Steve DeKnight, for christsakes, who should have more dignity.

Why did the guitar become your instrument of choice to learn?
It was my father’s.

You’ve said that acting is not so much putting on a mask but rather a process of selecting facets of one’s own personality that fit the character, which is much more revealing and truthful. What pieces of yourself do you feel are applicable to be Macbeth?
Force of will, impatience, and ruthlessness. But we all have those.

Favorite:
Halloween costume growing up? – Hmmmm, Super Monkey Man. I had an ape mask that fit all around my head and it had artificial hair. Planet of the Apes was out and I was all about the monkey. I terrorized my neighborhood that night.
Indulgence that you have now that you weren’t able to have before you were famous? – A swimming pool, a great guitar and every video game that looks interesting.