Back in the day, James Marsters' old official websites used to post a monthly Q&A session with James, & I'm reposting those Q&As every week for a bit of fun (& nostalgia)! Enjoy this week's Q&A from January 2007: 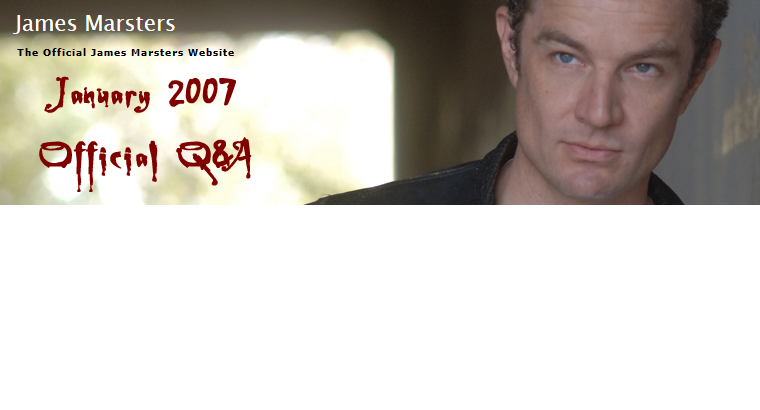 Most people remember where they were and what they were doing on September 11. Where were you and what were your thoughts about that day?
I was filming on the set of Buffy. Sarah stopped filming, shut down the set, and she and I went with her mother to try and find a place of worship to pray and to get some silence. We were the only two New Yorkers on that show.

Has anyone ever intimidated you? If so, who and why?
I get intimidated all the time, mostly by talent, and most recently by Kathy Bates who was a total sweetheart with a spine of steel and who gave me no reason to fear her.

How do you approach emotional changes within your character when the scenes are shot out of sequence?

I’ve noticed for both the Buffy and Angel DVD sets that you very rarely appear in the outtakes. Does that mean it was rare to catch you making a mistake on set?

Correct! (He laughs.) Early in my tenure I almost got fired for making three jokes in a makeup trailer. I decided that my only good defense was to be perfect.

During the Macbeth Q&A you were asked about Method vs. Shakespeare. Part of your answer was that the two don’t marry very well. May I ask your thoughts then of Marlon Brando’s portrayal of Mark Antony, bearing in mind that he was a Method actor in the truest sense of the word.

Brando showed himself to be an apt technician. He respected the meter and the line and gave a credible Shakespearean performance. I think there was less method in that performance than you’d suspect.

How have you changed or evolved as a musician since this all started?
(Long silence) I’m wondering if I’ve evolved at all since it all started. I’m better with my changes, I take longer to write my lyrics, and I rehearse more before I perform. But I wonder if I’ve evolved.

Favorites:
Toy you played with as a child: GI Joe and my rescue copter.
Time of Day: Late afternoon-early evening when the sun is still bright but low in the sky and the shadows are long.
Household chore: Putting up Christmas decorations.