Back in the day, James Marsters' old official websites used to post a monthly Q&A session with James, & I'm reposting those Q&As every week for a bit of fun (& nostalgia)! Enjoy this week's Q&A from February 2007: 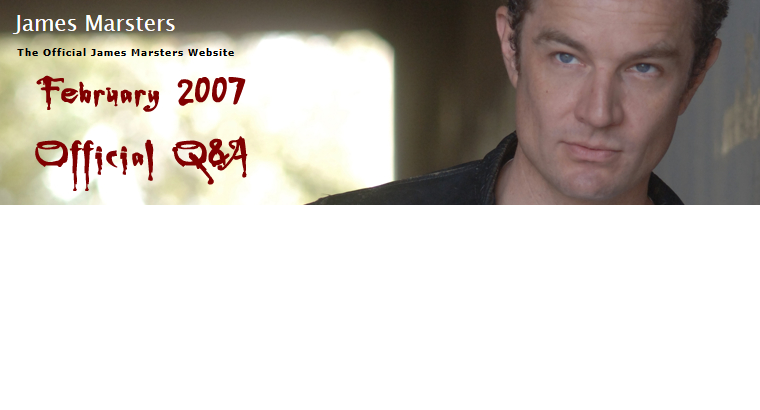 I know you quit smoking now, but when did you first start and why?

I first started smoking in college. My favorite actor at the time, Byron Jennings, was smoking and it looked cool.

I noticed that you play a right-handed guitar although you are left-handed. I am guessing that you were taught that way but I wanted to know if you have ever tried to play left-handed and to what result?

I tried to switch after two years to left-handed play and gave up. I didn’t want to start over again. But a guitar is a two-handed instrument so I don’t think it makes that big of a difference. I’m pretty good with chords but I need to work on strumming.

How was it acting against Michael Rosenbaum? I can sincerely say that you had brilliant performances against several actors, but I could literally feel you two push the other’s performance higher with some inner will you both seemed to have. Did they feel like any normal scene you’ve ever done, or was there something different?

Working with Michael Rosenbaum is like going to Space Mountain in Disneyland. If you are willing to go along with the ride it will be the funnest thing in the world. He kept me off balance which I think is a very good thing. It’s always fun to play scenes where the conflict is right out there in the open.

If you had to live without one of your five senses, which one would you be able to “give up”? And which one would be totally indispensable?
I would give up smell. I don’t have a good sense of smell to start with so it wouldn’t be a big loss. As a musician I guess losing my hearing would be the worst.

Is there any mystery or question that you have wanted to have explained or answered?
I’ve always wanted to know why people do what they do, although I don’t think one person can teach me that. People are weird and wonderful and I think I became an actor in order to answer these questions. Also, why do molecules have the tendency to go from chaos to order? I understand complex molecules, amino acids and the effect of epoch of time to create life, but I still don’t understand why molecules arrange themselves. Why do they bother? In there somewhere, I believe, is God.

Why Chekhov? What about his work appeals to you?
Philosophically Chekhov states that we are all of us loveable fools, idiots really, but also adorable. If done right he is howlingly funny. He skewers humans and their silly behavior and cuts deeper than anyone, but does it with love and humor.

If you could record a song with any other artist/band who would it be and why?
I would love to record with Tom Petty – he has never once gone dry. I would love to party with Mozart – that would be cool. I could blow his mind with some blues progression.

What annoys you most about other drivers?

(laughs) I get annoyed with drivers who pull out in front of me in traffic and count on me to slow down, putting their lives in my hands, counting on me to be the better driver. And there should be the death penalty for honking with no reason.