Back in the day, James Marsters' old official websites used to post a monthly Q&A session with James, & I'm reposting those Q&As every week for a bit of fun (& nostalgia)! Enjoy this week's Q&A from March 2007: 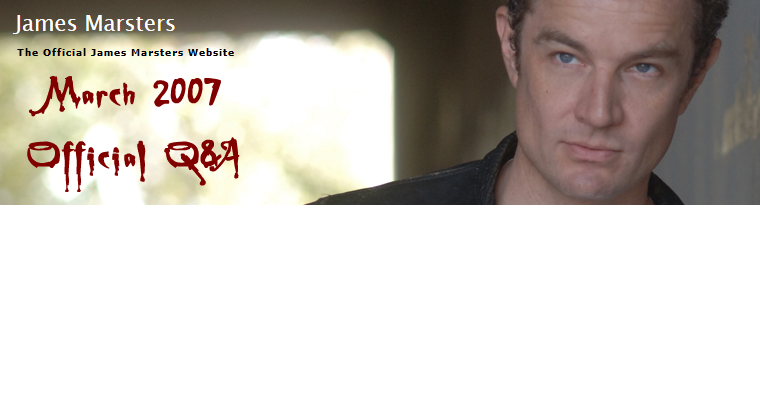 As a humanist, what is your opinion on the age-old question of whether a male and female can truly be friends? If not, why not?

Of course a male and female can truly be friends; but if there is a sexual attraction it is more complicated. It’s kind of sad that it’s still an open question.

How do you deal with discouragement and disappointment?

Don’t dwell on it. It’s inevitable as long as you’re breathing. Keep focusing on possibilities. It only takes a few successes to make a good life.

Is there any information you can share about P.S. I Love You or your part?

It’s the story of a strapping young Irishman and an intelligent, driven New Yorker trying to make it work in Manhattan. Things are complicated when the man dies of cancer but finds ways to stay in contact with his wife after his death. I play the man’s best friend. The driven New Yorker is played by Hilary Swank and the man is played by Gerard Butler, who is currently flexing himself in ‘300′. Both were fabulous people and made me feel very welcome. I’m as anxious to see it as all of you are.

Could you explain what the “punk” philosophy is?
Yes, that there is no future for the current young generation, age 15 – 25. All the jobs and money is getting sucked up by the older generation who does not want to share the pudding. Punk got ts birth in England, which has a permanent white underclass discriminated against much like our discriminated black underclass. So it’s a protest movement where you throw off any attempt to fit in with the culture and you revel in the fact that you are not admitted into the white hall. This makes middle-classed American punk rockers, like me, a bit suspect.

Do you have any interest in, or have you ever thought about writing a play?
Hmmm, in all honesty no. I had experience at adapting plays from other source material, some translation from other languages and helping young playwrights edit their plays, but I’ve never had the burning need to say something in the form of a play. I’m hoping that may come. There are some ideas but they are not fully formed yet. Right now I’m more likely to write a movie than a play.

How do you go about learning your lines and is the process different for TV, film and theater?

Learning my lines is the funnest part of my job. Many actors complain about it but I find that that is the time that I get to dream whatever I want and I don’t have to worry about the needs of a film crew. The difference between theater and film is that in film you have to memorize your lines as you would opening night in theater but you have no rehearsal to get that done so you do it yourself.

Favorites:
Childhood cartoons – Cartoons sucked when I was a kid. We had Super Friends and didn’t appreciate the irony because that’s as good as we had. We didn’t even have good Japanese stuff yet; it was all people running around in rubber suits smashing models.
Item of clothing – Old leather jacket from the 50s. I believe it to be an original Hell’s Angels jacket. It’s older than me and can’t help but look cool.
Pizza – It’s all in the execution. There is a Pizza Plus in Northern California that cooks its dough fresh and hand tosses their pies – this is rare. Most places have pre-made frozen crust. I just like plain cheese, but the crust is everything.