Back in the day, James Marsters' old official websites used to post a monthly Q&A session with James, & I'm reposting those Q&As every week for a bit of fun (& nostalgia)! Enjoy this week's Q&A from June 2007: 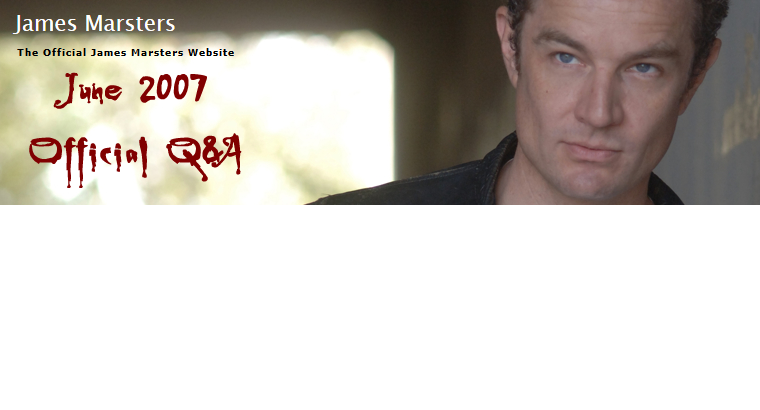 A very talented person told me he felt that knowing peace would inhibit his art. Being in the arts myself, I tend to seek it. In your opinion, what influence and effect does either ‘feeling pain’ or ‘knowing peace’ in one’s life have on an individual’s creativity?

Pain can be a great motivator for creativity but if you use it too much it tends to shunt you down the same alleyway every time. A great example of this would be David Caruso; he can seem powerful but it’s always the same. It’s much better to use all of the emotions, including love, because it’s that that we’re giving.

Song or album that an ‘ex’ ruined?

A girlfriend named Liz almost ruined the entire Bob Dylan canon. So far, I have rescued Freewheelin’ Bob Dylan, Blood on the Tracks and Blonde on Blonde. I’m still working on the rest. I may never listen to the Smiths again, and that’s a shame.

Are there any tricks to help you memorize vast volumes as you did in your recent Macbeth in ‘Words and Music’? The language of Shakespeare’s time is beautiful and full of meaning, but is not the easiest to memorize.

Actually, Shakespeare is the easiest to memorize. Once you understand all of the vocabulary, which admittedly might take a few years, you find that your lines couldn’t be said in any other way. If you say even one word wrong it sticks in your ear like a sweaty fly. It’s immediately less interesting, so you always know if you are saying your lines correctly or not. In general, the secret for line memorization is work – hours and hours after everyone is in bed.

I felt like I was just terrible. We didn’t take long to record most of my work and they were so nice to me. I was sure that they had decided to use someone else and were too polite to kick me out of the room. But I went back for some re-recording and they convinced me that they thought I did a very, very good job. Maybe I need to examine that.

In Buffy Season 6, when Spike endures the trials to win his soul back, he says the line “here we are now, entertain us” which is a line from Smells Like Teen Spirit by Nirvana. You’ve said you are a Nirvana/Kurt fan – was that written in the script or was that your idea?

That was most likely written for me by the writing staff because they knew I love Nirvana. And besides, you can’t reference the Sex Pistols every time. Spike knows a lot about music. The scenic department guy always had really cool albums laying around his home; Pixies, Arcade Fire, stuff like that.

Do you do your own housework? If so, what is your least favorite chore?
I will be honest. My niece’s nanny helps me with the housework. I keep my own room neat. I cook my own dinner and do the dishes, but to tell you the truth, I kind of enjoy housework. The last time I had a whole house to take care of was in Seattle.

Favorites:
Feature of a woman – You can’t chop a woman up like that. The eyes go with the nose and they both go with the lips. It all fits together in a way. It’s the overall spell, not the ingredients.
Meryl Streep movies – Wow. It’s a tie between Sophie’s Choice and The Manchurian Candidate.