Back in the day, James Marsters' old official websites used to post a monthly Q&A session with James, & I'm reposting those Q&As every week (I skipped the last 3 weeks due to being busy putting together my convention Reports, Pics & Videos posts for New York Comic Con, CloudsCon: Buffy 3, & Fandemic Tour Houston) for a bit of fun (& nostalgia)! Enjoy this week's Q&A from July 2007: 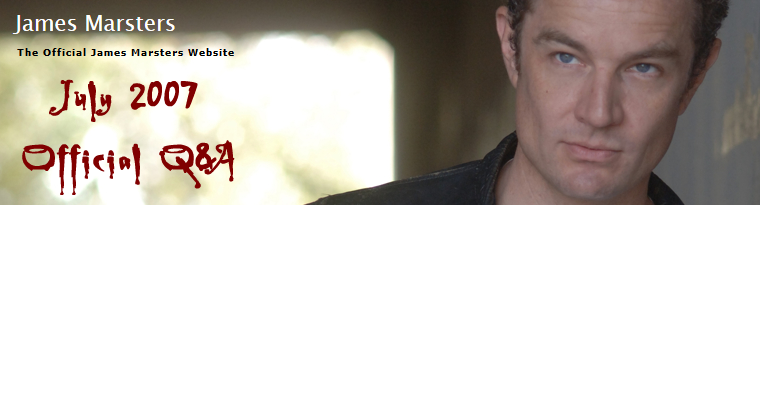 What gadget should someone invent that would make your life easier?

A better solar panel because we currently only get about 23% efficiency out of our solar panels.

Did you have a particular childhood pet that you might tell us about?
Ummmm, I was adopted by a stray cat who wound himself around my leg and shivered and wouldn’t let go. I named him Shivers and had him for ten years. He was the greatest cat – he let you pick him up any way you wanted to. I think I was 7 when I found him.

What is the hardest thing about guitar playing for you?
Being comfortable with the fact that the guitar is a very sloppy instrument. Guitar, by its nature, never hits the right note ever. If you go for a G, you’re gonna get a G sharp or a G flat, period. There’s no way you’re gonna get a clean note on a guitar because there’s the bending of the strings and there’s so many variables. On a keyboard, you hit an E and you’re gonna get an E. But, a friend of mine told me that perfection in music is not pleasurable and the proof of that is those irritating Christmas ornaments that will sing you the Christmas songs (imitates tinny melody). It’s soooo bad, but it’s perfect. It is in imperfection that the artist shines, that’s where the expression comes in. So, the artist is always kind of sharp or flat, that’s the expression – and that’s what’s so frustrating about the guitar but also so exciting – it never will be perfect.

Do you sing in the shower, and if so, with what song and/or artist does your soap usually get serenaded?

No, I don’t sing in the shower actually. I think that’s possibly because I have an outlet that’s more nutritional than the shower. When you are privileged enough to be able to sing your deepest feelings in front of an audience and have them clap, the shower is a very small place after that.

I often hear people saying they want ‘world peace’. Do you think the human race could ever achieve peace? Or do you feel that as a race we were genetically constructed to struggle and fight our way to the proverbial top?
Good question. I wrestle with this at night all the time. I feel like somewhere along the line mother earth decided to create carnivores and what that meant for my species was that we need fear in order to survive. If we don’t have a HUGE fear impulse, we’ll be eaten. The problem is that we have the fear but we also have the ability to destroy everything to try to keep ourselves from feeling fear. Sometimes I wonder if there’s a planet out in the universe where everyone was a vegetarian – is that the only civilization that has the hope of getting over its destructive phase? In my cynical moments, I think self destruction is inevitable because of fear. In my good moments, I think that humans are blessed with an intellect that can understand the limitations of fear and can block the fear and decide to act more intelligently. It’s just that when I examine history, I find more examples of fear running the day than logic. At the same time, I feel like we are at a crossroads as a race, where we are going to have to decide whether we are going to destroy ourselves or accept each other and that it is quite possible that humans can make the leap away from fear. I guess I’m kind of in-between those two philosophies, hopelessness and some measure of hope.

What were you scared of as a child?
Fitting in and getting beaten up.

What is the more discouraging response in theater, unintentional laughter at a serious moment, or no laughter at a funny moment?
They’re both hell on earth because as an artist, you’re leading your audience through an experience that is supposed to have a definite conclusion at the end. It is manipulation; and if they’re not responding the way you want them to it means that you have not calculated your manipulation correctly and they will not come to the conclusion that you believe is the truth at the end of the experience. So when you hear the audience laugh when you don’t want them to, or if they aren’t laughing when you want them to, it means that you’re wasting your time and theirs – and that’s horrifying.

What’s the secret to starting an interesting conversation with a complete stranger?
Connect with them as a human being. We’re all the same. Whether we’re black or white, or rich or poor, Muslim or Christian, man or woman, 95% of our impulses, and dreams, hopes and fears are the same. We all want love – we all fear isolation. We all want better for our children than we had. Everyone. I watched something on the History channel about this. Apparently, there are ten dreams that comprise 90% of everyone’s dream-life and what that means is on a VERY deep level, on the deepest of levels, we’re the same. So, when you meet somebody that’s a stranger, that seems different from you, just realize that they’re not different from you. You can connect with that person based on the deepest of truths about yourself. Just because you grew up with a popsicle in your mouth and they grew up in the desert trying to find water – well, talk about music, talk about your hopes for your children, talk about loving some girl who doesn’t love you; and you’ll find that they’re just like you.

Favorites:
Batman villain – I’ll have to go with the pat answer and say The Joker because he’s the smartest of Batman’s nemeses. He exposes Batman’s weakness most effectively, which is Batman has no Zuper powers – he’s a collection of gadgets, and it’s easy to make him bleed. The Joker is smarter than Batman I think. Batman’s incredibly intelligent, probably a genius, but I think The Joker is even a step above him. It’s only through faith and not giving up that Batman can win over The Joker. But I’ve always been a Batman guy – I like a hero who bleeds.
Song to cover – Any song that I think is worthy of my covering would be diminished by my presence. If I had to pick people I’d like to cover, but of course I never will: Nirvana, Dylan, the Beatles, Rolling Stones, and Robert Johnson. But you do NOT improve upon Robert Johnson, Beatles, the Stones. They did it as well as you can and if you want to eclipse them in any way, you have to write about yourself completely naked. It’s fun to play covers because usually you’re playing music from a better songwriter than you are and the audience responds so well – they’re such good songs. But you can’t fool yourself. You’re only approximating the original experience when the audience heard the real guy singing.