Back in the day, James Marsters' old official websites used to post a monthly Q&A session with James, & I'm reposting those Q&As every week for a bit of fun (& nostalgia)! Enjoy this week's Q&A from September 2007: 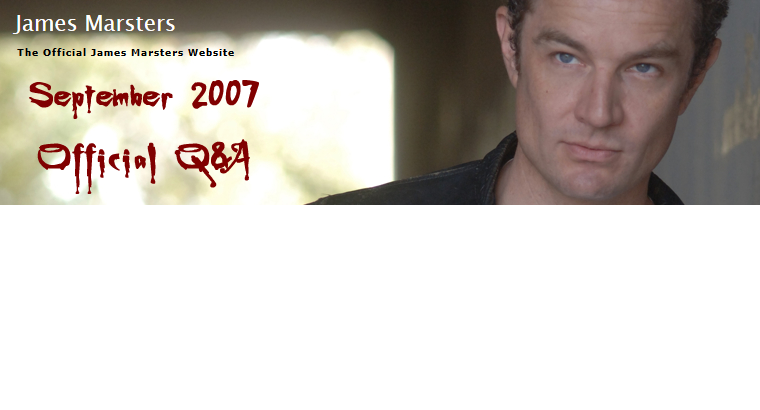 What do you think is the greatest musical instrument ever invented and why?
I think possibly the synthesizer. It used to take 100 – 500 years for a new instrument to assimilate itself into the orchestral, musical experience. They’d come up with a violin and everyone would go crazy and the next 500 years would be all about how do we incorporate the violin into our music. Now every new single that comes out has an incredibly distinct, synthesized sound, which is tantamount to developing your own new musical instrument. That goes way past the best violinist anyone has ever heard because even the best violinist that has been heard in 200 years is only playing the same instrument that’s been played for 200 years and his song will sound very similar to the hacks that had preceded him. But the engineer that comes up with a new synthesized sound that has a human resonance, it’s as if he’s made a whole new instrument and the possibilities from where I sit are endless. So, it’s definitely keyboards, computers and synthesizers – and that’s really hard for a guitarist to admit.

What was the last play you saw?

I think it was The Master Builder by Ibsen starring Sir Ian McKellan. I didn’t enjoy it. It was the last chance I gave my local theater company after being let down too many times before.

It’s a great compliment for an actor to say that the person playing opposite them was ‘generous’ in his or her performance. What does that generosity mean to you? Do you consider yourself a generous performer?

Very good question! Generosity in film means that when you are off-camera acting for the other actor’s close up, you give as much as you did in your close up. It seems like a no-brainer that everyone would want to give as much in their off-camera work as their on-camera work because it helps everybody, but you’d be surprised how many perfectly wonderful actors are forced to work with stand-ins for their close ups, which are the most dangerous shots when the camera is so close to you and can pick up any lie. That’s when you need your acting partner the most. It’s unfortunate that at that time so many actors decide to head to the trailer. I consider myself a very generous performer. In fact, I think I give a better performance off camera than I do on. Because I have no pressure off-camera, I can improvise with impunity, trying to elicit some real reaction from my acting partner that they didn’t plan on. Sometimes they get mad because I will change it up so dramatically, but I’m trying to give them a moment that’s truly real, trying to make something happen for the first time – the camera wants to catch you being surprised. That’s what makes good film. So if you stay in your trailer, half your job, you’re abdicating.

If you could say one thing to Spike, give him a piece of advice, and/or converse with him about anything… what would you choose and why?

Get over Buffy – you deserve better! (laughs)

How do you react to criticism, professionally and personally?
If I wrote it, criticism is hard. I feel like anyone who is writing their inner life is doing something very brave and, in a way, is beyond criticism. How can you criticize someone for telling you how they feel? I have a hard time criticizing most artists who write their own material actually because of that reason. If they’ve been honest and brave and set it out there, if it’s ugly or beautiful – if I don’t think of it as worthy, it’s probably my fault. So it’s very hard for me when my own work is dissed. It’s less hard, more mechanical, if I’m working on a playwright and I feel like a play can work but I get a bad review, I kind of feel like I’m a mechanic working on a carburetor, thinking I just need to add 3cm to that "whatever" and the thing will start on time and run like I want it to run. So it becomes less personal. If you write it yourself, it’s very personal.

Either/Or:
Bacon or Sausage? – Bacon because it can be rendered crispy without ruining it.
Christmas lights – all white, or multicolored – blinking or not blinking? – All white, blinking, but not in unison. I think that the Christmas tree is most beautiful when it approximates the original Christmas tree where real fire was lit and red, yellow and green blinking lights just don’t do it. I like fairy lights, as I call them, the white lights. They can blink or they can be steady, but I’m liable to put them up anywhere at anytime actually. I used to light my whole theater with fairy lights and I never had a better subscription audience in that season.