Back in the day, James Marsters' old official websites used to post a monthly Q&A session with James, & I'm reposting those Q&As every week for a bit of fun (& nostalgia)! Enjoy this week's Q&A from October 2007: 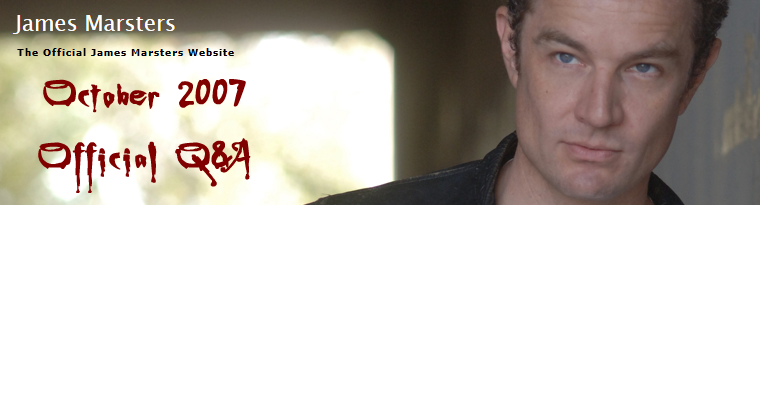 How do you overcome the judges in your head when you want to create?

Really good question! I tell myself that I have a lot of love to give the world and I’m finding interesting ways to show it. I think that we are all beautiful enough and interesting enough to reveal ourselves to one another. So the only way I can be boring as an artist is if I shut down out of fear or self-judgment. If I’m brave enough to be myself, I always succeed.

The biggest lie about your industry is:
That stars are treated well. The truth is that stars/actors in Hollywood are treated as slaves. It’s not glamorous but it serves the needs of the power elite, which are the producers, the networks, and the movie executives.

Why Macbeth as a person? I understand what attracts you to the play in general, but what attracts you to the character as a person?
Hmmm. Nothing. Nothing at all. The genius of Shakespeare is that his main characters have a hole in them which is to be filled by the person playing the role. If you ask who is Hamlet, the answer always is who is playing Hamlet. The experience of Hamlet or Macbeth is so universal. We all go through it. The job of an actor is to give his own specific experience, so that it seems believable that a single human being would have this experience. To try to say that Macbeth is one thing or another just limits Macbeth. Macbeth, or Hamlet, is everybody who has either fought for their rightful place in the world, or has abdicated their rightful place in the world for something that they thought was better and turned out worse, Hamlet being the former and Macbeth the latter. What Shakespeare provides is the universal truth – what you have to provide are the specifics of your human experience. I react to the fact that Macbeth speaks to me – I’ve made the same mistakes. I feel like I am him, but I think that all human beings are.

What gives you confidence? What takes it away?

What song is currently in your head?
‘Hey There Delilah’ by the Plain White T’s.

The latter definitely in both cases. I hope it’s true in romance because I’ve messed up so many times.

If it didn’t mar your chances for a role, what is one tattoo you’ve either considered or would be interested in getting?
Tribal swirl on my arm.

Favorites:
Star Wars movie and why? – The first one (episode 4). It was the most giddy, it was the most fun, it was the most thematically satisfying. It tells the hero’s journey which is the classic crowd pleasing myth. Thematically you didn’t need anymore movies after that, but it was sure fun.
Late night snack – I am an actor in Hollywood and there is no such thing as a late night snack. They do not exist – you stop eating at sundown and you get to know your hunger. You’ll be spending a lot of time with that bastard and you gotta know how to beat him. The more fat you’re burning the louder the voice gets to eat and you have to know how to beat that voice down. It’s an act of will every day.