Back in the day, James Marsters' old official websites used to post a monthly Q&A session with James, & I'm reposting those Q&As every week for a bit of fun (& nostalgia)! Enjoy this week's Q&A from November 2007: 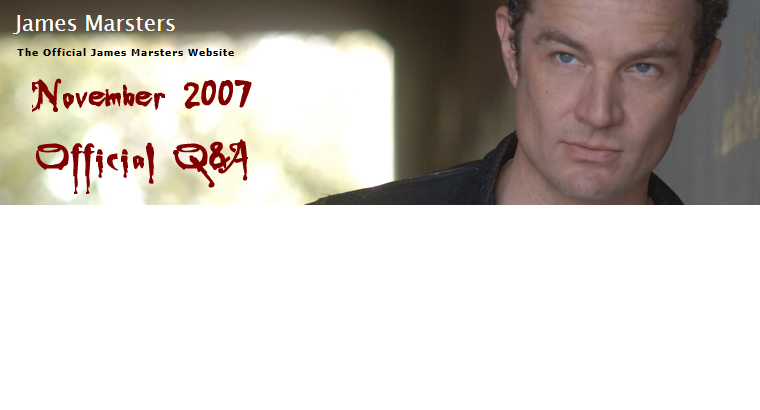 If you were in the Mississippi Delta and were down at the Crossroads (no soul selling involved), would you ask to be the greatest guitarist or actor?
I don’t believe in the Crossroads. I believe that the Blues were created in response to slavery and had nothing to do with the Devil. The Devil can’t help me be a good actor either. I’m not afraid of the Devil.

In the movie House on Haunted Hill when the elevator appeared to be free falling, was it in the script to jump up and down or did they just type in something to the effect of interviewer / cameraman: ‘panic’ and you improvised that action yourself?

Yes, that is exactly right! I always thought that I would jump up at the last moment and save myself which I understand from Myth Busters that that wouldn’t work. I’ve also noticed that when people get very frightened they hop from one foot to the other, almost as if they want to run. I think this is very dear. So yes, that was my idea, thanks for noticing.

Which do you personally find more difficult: to apologize or to forgive and why?

Way easier to apologize. I can admit that I am a jerk sometimes, life has taught me that; but forgiveness is really tough. I have perfected ostracization instead.

Have you ever spent like a THOUSAND HOURS working on a song all night, finally got to sleep, then wake up the next morning and think it sounds like s**t?
(laughs) Yes, my notebook is full of them!

I was listening to NPR the other day and they said that Quentin Tarantino believes he was Shakespeare in a previous life. Any thoughts on that? I think it’s hilarious.

(giggles) Go Quentin! He’s right. There’s 120 million atoms from Shakespeare’s body that are right now in Quentin’s body, maybe he senses that – but it’s true for everybody. There’s a good book to read called The Brief History of Everything.

Why do you think Angel ended the way it did?

Because they wanted a heroic moment for the cast and could only afford cold water so they dumped it on us all night long. I guess the point is that redemption doesn’t depend on survival.

When you are singing or acting on stage, does the emotion in a piece or song ever become almost too much to bear? Or does that enhance the performance, from your perspective?

It happens and is to be avoided; it will mess you up. It will clog up your throat and you’ll sound like a frog. You have to stay a little bit away from the actual emotion.

Either/Or:
Stuffing cooked inside the turkey or on the side as dressing? – Both. I love the stuffing. Cornbread with apples and sausage. But you have to know that the stuff inside the bird is way up fatty.
Are you a handy man or someone who can barely change a light bulb? – Handyman. I ran a theatre for years.