Back in the day, James Marsters' old official websites used to post a monthly Q&A session with James, & I'm reposting those Q&As every week for a bit of fun (& nostalgia)! Enjoy this week's Q&A from December 2007: 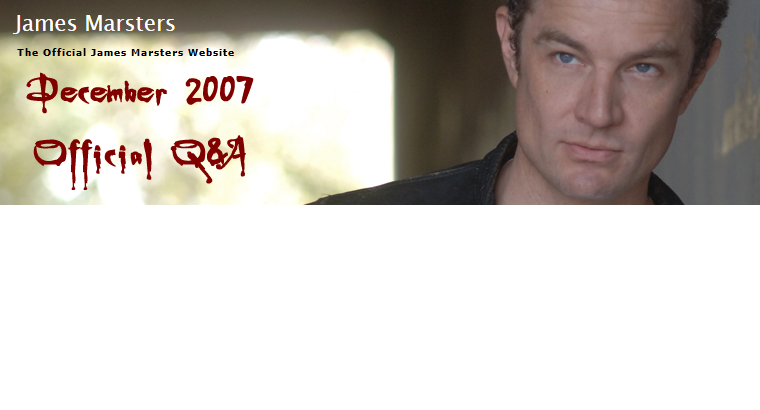 How do you feel about censorship in general and has your view of censorship changed since you had kids?

That’s a really good question. I am adverse to any form of censorship but there are appropriate outlets. I’ve always felt that way. What is appropriate for a late night comedian is not necessarily right for a 3 PM television show.

Name something you’ve heard about women that tends to be true?
Women are human beings. No other generalizations I can make – anything else would seem foolish. Everyone is an individual. Some women share more in common with me than some men.

As Spike you were asked to do a little bit of everything – from comedy to high drama. What do you find more difficult – comedy or drama and why?
Personally I find comedy more difficult. Drama needs sincerity most of all but comedy needs sincerity and rhythm and every script has it’s own comedic rhythm. I’ve seen people go insane to try and find it. For Buffy it was easy because the comedy was very dry.

While most of your songs speak of emotions, there are also a few like Lou and Button Down Vandals which are simple narrative. How does the connection differ with the audience when you perform both types of songs and which do you find more satisfying creatively?
It’s true most of my songs are navel-gazing songs, but I’m trying to get away from that and write songs about people who don’t exist except in my head. I think the audience appreciates when I climb out of my navel. It’s warm in there but a bit stuffy. The songs Lou and Button Down Vandals are taken from my own life. They are actually not stories but my own history.

What has been the most significant period in your life so far – the time that made you what you are today?

The period from 1996 till now starting with the birth of my son and caring for my niece. All other periods were just preparation.

My brother-in-law says Eric Clapton is a guitar god. Who is your guitar god?

There are many gods in the pantheon of rock – let us take a stroll… Eric Clapton, Jimi Hendrix, Jimmy Page, Axe, Edge, Lenny Kravitz, just to name a few.

What is your ancestry?

English, Irish, German, French and quite a good bit of Scottish from the Buchanan clan. My family Marsters is in the book of Domesday and helped Norman conquer in 1066 – we were good at something so they called us Masters and gave us a good castle and some sheep and stuff.