Back in the day, James Marsters' old official websites used to post a monthly Q&A session with James, & I'm reposting those Q&As every week for a bit of fun (& nostalgia)! Enjoy this week's Q&A from February 2008: 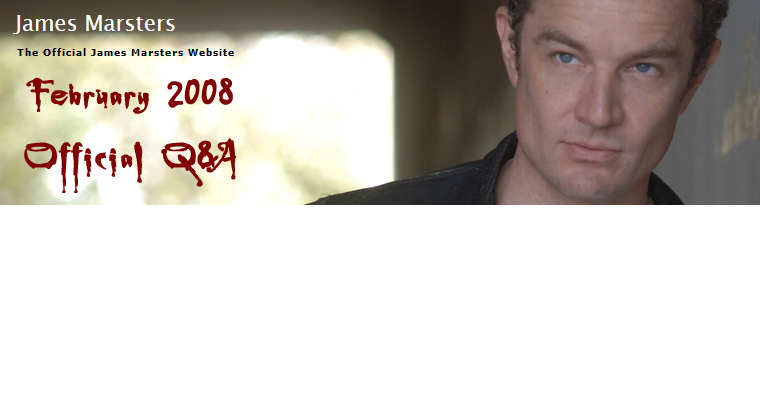 What makes you sentimental?
My kids.

The handicap of our youth is the missing insight we gain in our later years. Shakespeare, though, lets younger characters hold monologues in which his own wisdom shines through. Man on a mission or vanity, what do you think?
I don’t think so. I think Shakespeare’s young people are impetuous and rash and maybe a reflection of his earlier self. We think of them as geniuses but that’s just because Shakespeare writes so damn well and you can’t ask him to stop doing that. But he doesn’t look down on young people – some young people are quite smart.

What is the best thing and the worst thing about acting?
The worst thing is to have to wait around for people to create a job for you. Creatively that’s deadly. The best thing is getting all the credit for all the hard work that’s done on the set that you never even knew about when they finally do give you a job.

If you had to gain 30 pounds for a role, you’d eat…
Ice cream, fried chicken, pork ribs, chocolate.

Have you owned any pets since Zachary died? If so, what?
No I haven’t. I’m just not home very much. Maybe I’d get a cat.

It has been told that you molded/transformed the original, scripted character of Spike into what he is now. Did you in any way change or enhance the character of Milton Fine and if so, how?
The story arc of Milton Fine was never told to me and I still don’t know what it was. I was not as much in the loop on Smallville so I didn’t have the occasion to present my ideas.

Favorites:
Actor when you were growing up: Robert DeNiro and John Savage
Comedian: Lenny Bruce

Either/Or:
Xbox 360 or Playstation 3? Playstation 3.
Jetsons or Flintstones? I’m sorry if I offend you but neither one of those shows was very funny. Life for me began with The Simpsons and then got better with South Park, Robot Chicken, and Ren and Stimpy!