Back in the day, James Marsters' old official websites used to post a monthly Q&A session with James, & I'm reposting those Q&As every week for a bit of fun (& nostalgia)! Enjoy this week's Q&A from March 2008: 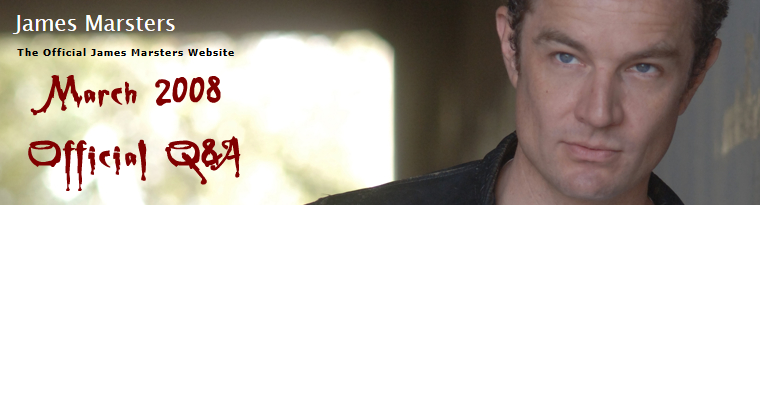 How territorial are you?
I don’t like to admit this but I am extremely territorial. I never really thought about that. I must have people knock on my trailer, my bedroom is my sanctum sanctorum and if anyone kisses my girl I’ll kill them (not literally). I like to pretend that I’m a peaceful man. My peaceful act has worked for the past fifteen years.

Does theater allow for a lot of spontaneity, or do you find yourself hampered by the blocking in that regard?
There is a freedom in structure. Structure can seem like a straightjacket at first, blocking, beats, etc., but like a dancer or gymnast, once you master that structure you become free and can really fly.

I’ve noticed many of your songs have water/ocean references in your lyrics. Is this a subconsious thing that you’re not that aware of, or is it a purposeful theme that represents something to you?
I noticed two years ago that I used the ocean as a metaphor a lot. In a weird way, I think of it as home.

If you could go back in time, what question would you most want to ask William Shakespeare?
(long silence) I don’t have any questions for Shakespeare. I think he lays it all out. He was so prolific and I think he explains himself well. I may be a bit too confident in this but I think I get the man. I think every play is saying that we as human beings all have a lot in common.

Do you ever feel that Buffy and Spike’s relationship was somewhat unfinished? Needed closure?
I think thematically it did get closure. Spike really wasn’t reformed after what happened in the bathroom – he seemed unworthy of her. By the end of the series they made him again worthy, but dead, trying for some tragic epic sweep I suppose. The problem I think, is that they didn’t want to spend much time on that – they needed the time to tell the story of the potentials so instead of doing something active I got to wear a jewel on a chain and blow up. It was the most time effective way to do it, but it lost something.

Either/Or
Paper or plastic? Plastic –it’s better for the environment surprisingly.
Professional or college football? I must say I enjoy professional – the violence factor is much higher in professional.
What would tempt you back the most, a favourite playwright or a good paycheck?
Playwright — without a good playwright, it’s worse then flipping burgers.