Back in the day, James Marsters' old official websites used to post a monthly Q&A session with James, & I'm reposting those Q&As every week (skipped the last couple due to being busy with Wizard World Portland coverage & a heat wave!) for a bit of fun (& nostalgia)! Enjoy this week's Q&A from July 2008: 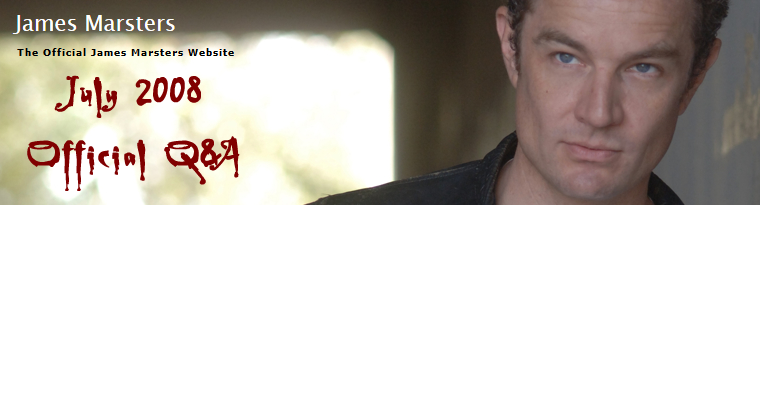 Well, sometimes "regular" Q&A’s don’t happen as planned! However, James has devoted fans from over 100 countries who frequently write in requesting information about his songs and the meaning behind them. So for those fans (from as far away as Malaysia, Bangladesh, Azerbaijan, and Argentina, to name a few) who may never have the chance to attend a concert or hear his song comments in person, here are a few clips about how some of his songs came about.

Long Time is whining about a girlfriend I lived with for three and a half years. I kind of woke up to the fact that it was less of a deep relationship than I thought it was at the time.

Angel was about a different girlfriend who I never really thought she liked herself as much as she should have. I thought she had reason to like herself a lot, so I wrote a song from my perspective that she really was an angel in the world….but she didn’t see it.

Civilized Man was about a second AD (Assistant Director) who was working on a movie called Cool Money that I did in Chicago and he was a real jerk. He’d scream at everybody. I was the lead in it and he’d scream at me and he would just be abusing actors, and just pissing me off. And I dealt with it pretty maturely. I went to the AD and just said he’s a problem for me and keep him away from me. I don’t need to be screamed at in order to come to set. So I found that I had a lot of animosity when I got home from work at night, dealing with this guy, and so I wrote a song all about how I would like to beat him up. That’s called "Civilized Man" and it’s all about how hard it is sometimes to be civilized. I found out later that he was on cocaine, he was on drugs, he had a coke problem and that’s why he was such a d**k.

No Promises is kind of a prayer out into the universe to find a good woman. It was written during a time when I wasn’t dating and I was re-evaluating the kinds of people that I had been dating and trying to have a happier relationship. So it was kind of like, "when I do start dating again, I hope I find you."

This Town was written for the band, Ghost of the Robot when we were together, and the band said it was about primal hope; hope when hope makes no sense, when hope is actually, maybe kind of foolish but you stick to it anyway. And that somehow, that’s kind of the best part of humanity – specifically the kind of hope where you’re gonna find love. And, just, for me, how often someone’s in love with somebody but that someone they love doesn’t love them back, and that’s person’s in love with a third person and that third person’s in love with somebody else; and how it sometimes feels rare that two people are actually in love with each other and how much longing and yearning and pain is involved in that. So I kind of wrote a story about that.

Poor Robyn - This was a song I wrote about an ex-girlfriend and we kept trying to get back together at fits and starts and finally I kind of wanted to close that chapter in my life and stop dating Robyn. It was originally called Over Now but then I changed it, trying to be as loving as possible about that.