Back in the day, James Marsters' old official websites used to post a monthly Q&A session with James, & I'm reposting those Q&As every week for a bit of fun (& nostalgia)! Enjoy this week's Q&A from August 2008: 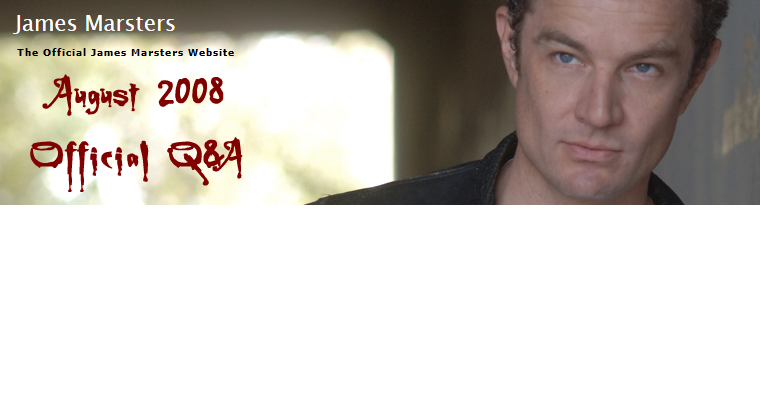 How do you handle it if someone takes things too far in a scene, especially a fight scene or a love scene?
In a fight scene you go to the fight choreographer and he would definitely fix it. They’re very careful with actors in Hollywood. For a love scene I’m always the one pushing it too far.

In the last issue of Buffy’s comic seasson 8 Joss makes Buffy gay. What do you think about this choice? And, what would Spike have thought about it?
I asked Joss about that and he said that she wasn’t necessarily gay but was experimenting. Spike would not accept that she was gay, but I would.

What quality in yourself would you like to improve?
My discipline. I relax too well.

If you could change one thing to make life easier for your own gender, what would you change?
I would make it acceptable for guys to cry.

Was there a particular event – eg. Vietnam, Watergate, or a particular person that made you politically aware or was it something you grew up with?
I grew up in a hippy household but the politics were not shared with me. It was midway through the Reagan administration that I began to wake up. It wasn’t until midway through the Bush Sr. administration when he raided the social security fund to balance the budget and nine months later claimed that Social Security was not solvent and needed to be “fixed”, which was a buzz word for killing the program. I think I was 23 years old.

Do you play any of your new songs to anyone first for their approval before you record them or perform them on stage? Or do you trust your own judgement?
I play them for my friends and family, not really for their approval but really just because I’m excited that I wrote a song.