Back in the day, James Marsters' old official websites used to post a monthly Q&A session with James, & I'm reposting those Q&As every week for a bit of fun (& nostalgia)! Enjoy this week's Q&A from November 2008: 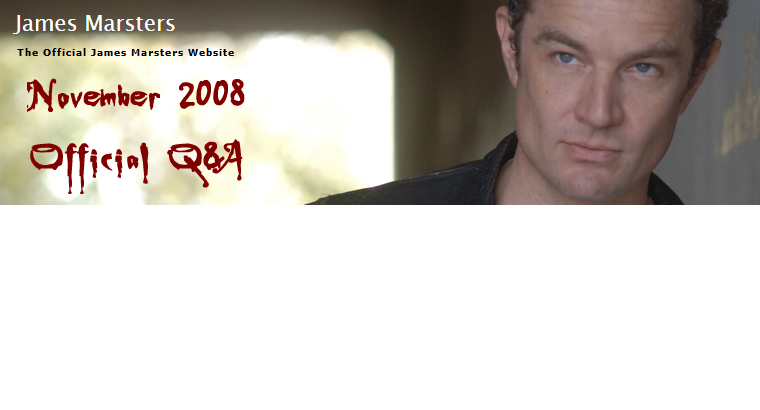 How long do you usually spend thinking about the things you are going to do? Are you impulsive or do you like to think things out first?
I’m in between. I used to be very impulsive and now I do think ahead, but I’m still rather impulsive and I love unstructured time.

Is envy a form of acknowledgement?
Yes. But it’s a form I’d like to avoid.

What sorts of roles do you see yourself playing–or do you see attracting you–as you get older?
I would like to play rock stars, physicists, ummm, spacemen, poets and psychotic judges. Or maybe just the dad.

Name at least one thing you don’t want to end.
The Greenland ice sheet.

What is the most embarrassing song you love?
I’m a punk rocker, I have no shame! I have no secret Captain and Tenille song on my Ipod. I do have McFadden and Whitehead’s “Ain’t No Stoppin’ Us Now” but that was for an audition for Hugh Jackman.

Who was your first crush/love?
My first crush was unrequited – Kelly Wood, fourth grade through seventh. I wonder where she is now…

Favorites:
Anime – "Nausicaä", followed quickly by “Dragon Ball Z”.
Shakespeare scene – It’s in The Winters Tale – when the queen is revealed not to be a statue but to be alive.