Back in the day, James Marsters' old official websites used to post a monthly Q&A session with James, & I'm reposting those Q&As every week for a bit of fun (& nostalgia)! Enjoy this week's Q&A from June 2009: 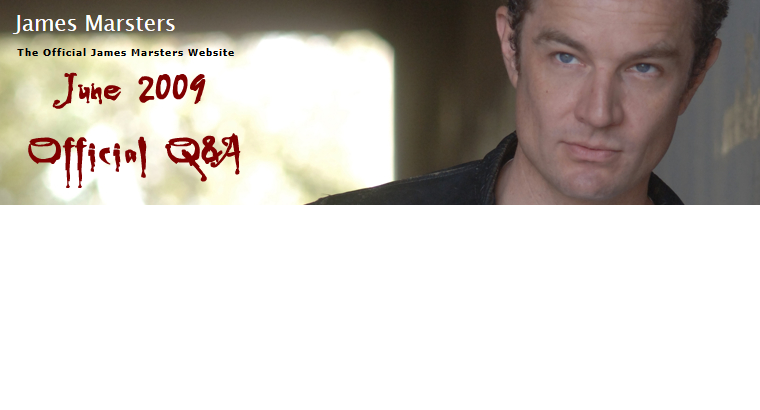 What Shakespearean villian(s) would you love to portray? I ask, because I think you’d make a great Iago!
Exactly – so that would be the one!

Do you use funny voices when you read to your kids at bedtime?
Uhm, my kids are too old, they don’t want me to read to them anymore. But when I did, the voices I used were (adopts exaggerated proper diction and posture) appropriate and not funny at all, which led to the drama of the book. (laughs loudly) But no really, they weren’t funny voices but they were right for the story – so yes, I would use different voices, but in a way that the kids didn’t even process that the voice changes – it was just integrated as part of the story.

Technically speaking, which singer has the skills you’d most love to emulate?
Bruce Springsteen – he has the most honest voice out there right now. I would love to get a little tiny John Lennon, who was, afterall, the original Kurt Cobain, in me as well.

What is the origin of the name Piccolo?
Online I’m told it was from the musical instrument but I don’t know if that’s true or not.

What prompted you to start a You Tube page with your son Sullivan?
I wanted to introduce Sullivan to fame. I was counting on somebody being rude in the talkbacks, but the comments were all so nice that I don’t think I got the lesson I was looking for for my son, which is that fame is a double-edged sword. Right now it just totally looks cool to him and I wish people weren’t quite so polite. (laughs)

Either/Or
Star Trek or Star Wars
Wow. Uhm, both. Star Trek came first of course and Star Trek gives me hope for the future. Star Wars rekindled a deep mythology – Star Wars is basically a thousand year old story. It’s amazing that it made so much money because we’ve been told that story a thousand times – but it’s just such a good story. So, yeah. both. I’m not gonna choose.

Ginger, Mary Ann or Mrs. Howell?
Oh!! Totally NOT Ginger! Mary Ann. Totally Mary Ann. Because Ginger would never be true to you. I live in Hollywood. I know! (laughs)

Finish this sentence:
At home my favorite item is … Keys to let me in the door. Home is a good place.
I tend to be emotional when… I breathe.