Back in the day, James Marsters' old official websites used to post a monthly Q&A session with James, & I'm reposting those Q&As every week for a bit of fun (& nostalgia)! Enjoy this week's Q&A from August 2009: 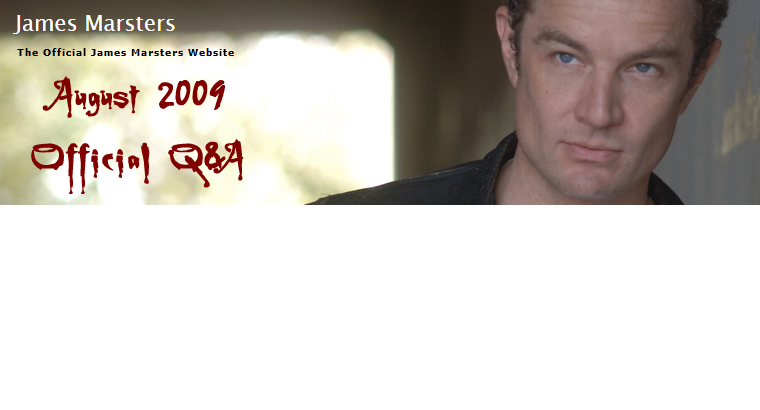 Is there a movie that makes you cry everytime you see it?
“W” by Oliver Stone. (laughs)

Have you had a role that really changed your life and the way you see things?
Hmmm, (pause). Yes, I have many times. I was very lucky in early adulthood to do many classic plays and I feel half-raised by the great authors. Plays like “Dollhouse” by Ibsen, ‘Measure for Measure”, “Much Ado About Nothing” and “Macbeth” by Shakespeare, “The Red Coat” by David Mamet – these were the teachers at my finishing school.

What did Spike’s vampire face feel like?
Like nothing at all! The foam was very light and moved with your face with no effort. The teeth sucked – they forced you to mumble and slur when you were trying to be inhumanly cool.

Have you considered the possibility of one day starting up another theater company? If you did, is there anything that you know that you would do right off to make it work best?
If I met the right five people who are in on the thing, I could be talked into it, but it is second only to child rearing in its difficulty. The one thing I’d do first is to get a business manager. Doing good plays that are well-received is not guaranteed without that.

Could you say a few words about Andy Hallett? It broke my heart when he died and I’d love to hear someone who knew him say a few words about him.
Andy was a real man – you can tell an adult by how they deal with pain or adversity. Andy’s eyeballs gave him searing pain all day every day because of the contacts they used. He was every moment a gentlemen; laughing and joking, wiping the tears from his eyes.

Obsession – unhealthy or motivating and why?
Unhealthy. You gotta be careful not to want something that you can’t figure out how to get.

I’ve noticed that many fans sing along with you at concerts. What goes through your mind when you look out at an audience and find them singing the songs that you wrote along with you?
I hope we all keep the same time (laughs).

Favorites:
Batman: There’s no other Batman, but the current Batman, Christian Bale. George Clooney? Come on, man. There’s nobody else with the balls of Christian Bale.
Outdoor activities: Hiking, biking and frisbee.
CD you always reach for to play when you’re driving: Nick Drake.