Back in the day, James Marsters' old official websites used to post a monthly Q&A session with James, & I'm reposting those Q&As every week for a bit of fun (& nostalgia)! Enjoy this week's Q&A from October 2009: 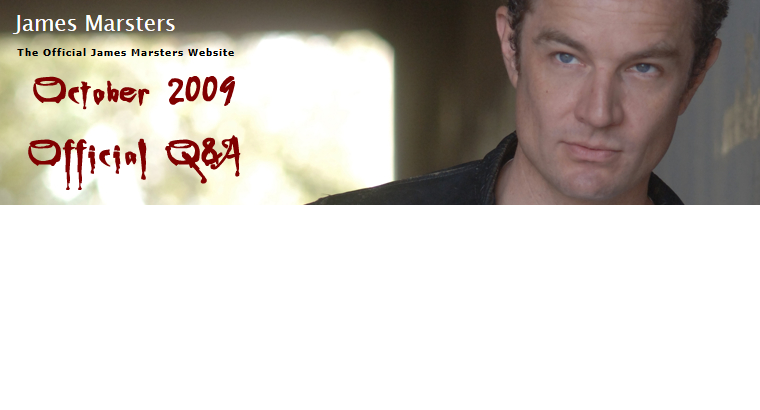 What goals do you feel you haven’t accomplished yet in your music, either in your lyrics and melody, or in your guitar playing? What are you still striving for?
Writing a good bridge.

Do you doodle while you’re on the phone and what is your doodle of choice?
Yes, arrows piercing flesh.

There has been a recent resurgence of questions regarding Shakespeare’s identity by groups which include notable actors like Derek Jacobi. What is your opinion of the controversy regarding Shakespeare’s authorship?
Every author has a different flavor and style, they taste different – each of them. To me all of the Shakespeare that I’ve done, including staged reading, auditions and plays, all of it tastes the same.

Do you like your driver’s license photo?
Yes! I actually do! And so much so that I really don’t want to get a new license because I know I’m gonna be older now. I’m two months away from getting a new passport photo and the new one is gonna be like (scrunches up face). Laughs.

What was one of your "least favorite reads" (i.e. assigned or forced on you by a teacher – a topic you didn’t like, or a theme that didn’t fit with your life at the time) that turned out to provide insight, motivation or opportunity for you later in life?
My teachers were cool and gave me good stuff to read; but I did get stuck with Alan Greenspan’s latest book on CD during a 5 hour road trip where he bragged about his finesse of the economy. Obviously written before the economy tanked! Too sad to be funny.

City in the world and why: San Francisco, which is a frontier Paris, but doesn’t pride itself yet and has found the wisdom to be tolerant – which is why United Federation of Planets chose it to be its capital.

Sandwich: Just a good hoagie on a warm day.