Back in the day, James Marsters' old official websites used to post a monthly Q&A session with James, & I'm reposting those Q&As every week for a bit of fun (& nostalgia)! Enjoy this week's Q&A from November 2009: 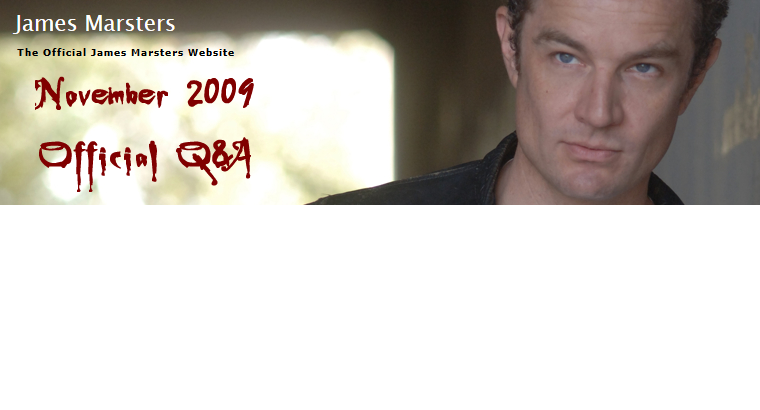 Do you consider yourself a feminist?
I consider myself a humanist.

I hate screen cliches such as someone someone reaching for another person in bed as they wake up, but that person isn’t there, or someone running but always falling. What movie or tv cliches bug you?
Cowboy six-shooters with 24 bullets. Everyone wakes up looking gorgeous. And everyone dries off from a rainstorm in seconds.

If you could be a part of President Obama’s cabinet, what would you like to do? What do you think you would be good at?
I used to think I’d make a great press secretary until all the teabagging started and I realized I don’t have the patience. I would have lost it a long time ago. I would have said “shut up you fools, he’s trying to help you” but that wouldn’t help the boss.

In Moonshot there were some sequences that appeared to be in a weighless environment. Were they filmed on one of the trainers used to simulate a weightless environment? If so, did you enjoy being weightless?
Ha, ha, ha, fooled you! Those were all poor-boy shots on earth. Credit good mime training.

What process or thought does it take to cry on cue? I’ve heard it’s one of the hardest emotions for some actors.
Mmmm, mmmm… (silence) Crying on cue is hard. The best thing to do is to think of the saddest thing in your life and then try NOT to cry. But surprisingly, laughing with sincerity is harder – especially on take seven.

Do you ever play any low-tech sort of games, like board games or card games? If so, which ones?
Risk and, following the President’s lead, poker.

Neat or messy? Neat… I lie – messy, with very short periods of neat.
Presents on Christmas eve or Christmas morning? Both.
Spend six months traveling in Europe or six minutes on the moon? On the moon, baby!