Back in the day, James Marsters' old official websites used to post a monthly Q&A session with James, & I'm reposting those Q&As every week for a bit of fun (& nostalgia)! Enjoy this week's Q&A from February 2010: 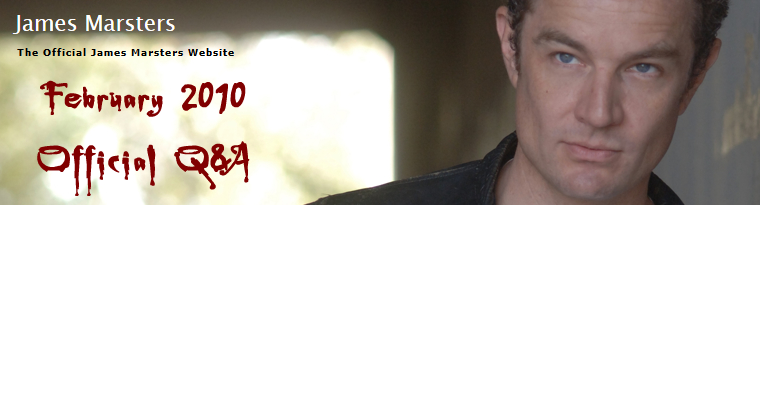 What was your very first non-acting job and how old were you?
Dishwashing at the Nest Restaurant in Modesto, CA

Did you ever have a special childhood stuffed animal, and if so what was it called?
At one point I had 27 stuffed animals and they were all arranged in a row so I had no room in bed and I was happy as a clam. My favorite was a snake named King Edward.

Can you walk on stilts or ride a unicycle?
Yes. I am a man who took acting classes all his life. I can do the unicycle, I can do all that crap. (Laughs.)

If you were to inhabit the world of any video or computer game, which one would you live in?
I like dark apocolyptic video games, but I have no interest in living in those worlds. But if I could be Batman I’d be willing to go to Arkham Asylum,

On days when you are home and able to relax, do you prefer to go barefooted, wear only socks or wear socks and shoes?
I give equal time to all footwear!

As someone who obviously enjoys his work is there any aspect of your job that you dislike?
Waiting. My favorite word in the universe is “action” so everyone has to shut up and let me get to work.

I understand you are influenced in your song writing by the music of Nick Drake, I just wondered which song of Nick’s is you personal favorite , and how you first heard about him?
I’m not arrogant enough to claim Nick Drake as an inspiration. He’s too complex for me to copy. My favorite song is the last cut on the album Pink Moon. I heard about him from a car commercial!