Back in the day, James Marsters' old official websites used to post a monthly Q&A session with James, & I'm reposting those Q&As every week (missed the last couple weeks cos I was working extra shifts) for a bit of fun (& nostalgia)! Enjoy this week's Q&A from July 2010: 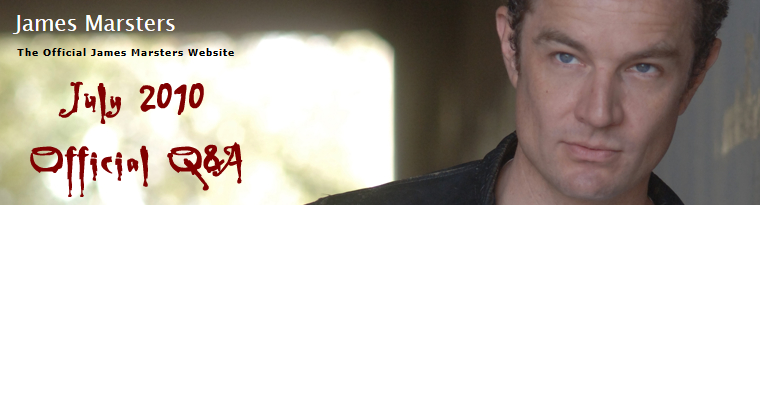 You’ve spoken in the past about Edmund Kean, an theater actor from that past century you admire. If you could spend a day with him, what would you want to know?
I would probably hate Edmund Kean. If I ever met him, I would probably punch him. He sounds like a really ridiculous asshole. But he was a genius. I think I would much rather be in the audience and watch him than have dinner with him.

I just finished watching Lie to Me and was wondering what your motivation was when you opened the door at the end? You had this happy smile on your face…
Oh yeah! My wife had just told me we were going to have sex. Well, you have to have a secret! And I decided that I was a guy with a large family, we had five kids, we were always tired. But that one day, my wife was cooking and she comes up and says, “hey baby, just wait til the kids go to bed tonight!” and then – I opened the door. You should come from a mountain top right before you get killed, you know?

What is the TV show you miss from childhood?
Hawaii Five-0. But oh, that’s RIGHT! We’re making a fresh one! I don’t have to miss it anymore. (Laughs)

What is your honest opinion of your face?
Uhhhh. I think I’m like a 6 1/2. I think I’m good looking enough for television, but the reason I keep getting work is because I care.

How does one know when it’s really love?
If after 18 months when you’re starting to really know the person, you find out if your initial attraction was real or just you being too hopeful.

What kind of music would you never listen to under any circumstance?
Music of the hair bands – Bon Jovi back in the day. Any band where the band wears more makeup then Elvira.

Do you think in our day and time everyone should carry some sort of weapon with them?
No!!! My God, no! Ask me again in 15 years, but not now.