Back in the day, James Marsters' old official websites used to post a monthly Q&A session with James, & I'm reposting those Q&As every week for a bit of fun (& nostalgia)! (And just a heads up, I'll be skipping the next 2 weeks as I'll be working extra shifts.) Enjoy this week's Q&A from October 2010: 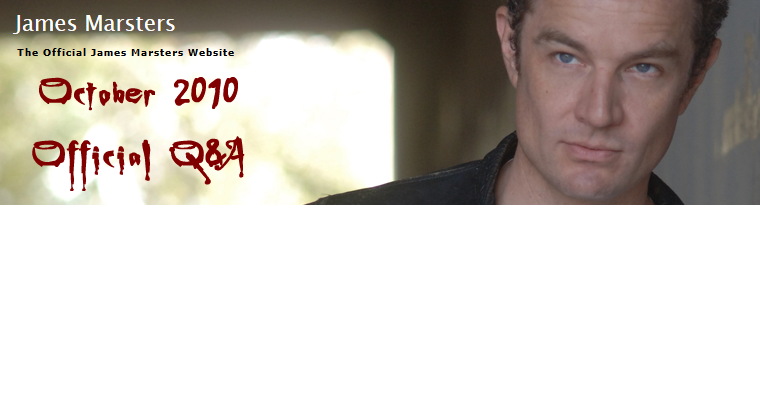 What do you wish you were better at saying “yes” to?
The world. I think you should say yes to everything you can. Yes to political action. I wish that I could say yes, that I was politically involved right now.

Can you ride a horse?
No! Horses hate me! When I filmed High Plains Invaders, my character was supposed to ride a horse because I was a cowboy, but the thing was, being a method actor, I was dealing with a high level of fear and panic – the whole movie was about dealing with panic. So being method, I was actually sweating, I smelled of fear and the horses just bolted on me. Laughs.

If you could sit down with Meryl Streep, what would you ask her?
Oh man… “pass the salt.” I wouldn’t dare to ask her anything! I would be so afraid that she would think of me as an imposition, so I would just simply say, you know, pass the salt or something. Laughs.

Have you ever thought about teaching a workshop to help acting students in subjects like Shakespeare or acting for the camera?
Very much. But they don’t pay any money to teach. That’s the problem. As soon as my kids turn 18 and I can work for free again, then yeah, maybe I’ll teach.