Back in the day, James Marsters' old official websites used to post a monthly Q&A session with James, & I'm reposting those Q&As every week for a bit of fun (& nostalgia)! Enjoy this week's Q&A from November 2010: 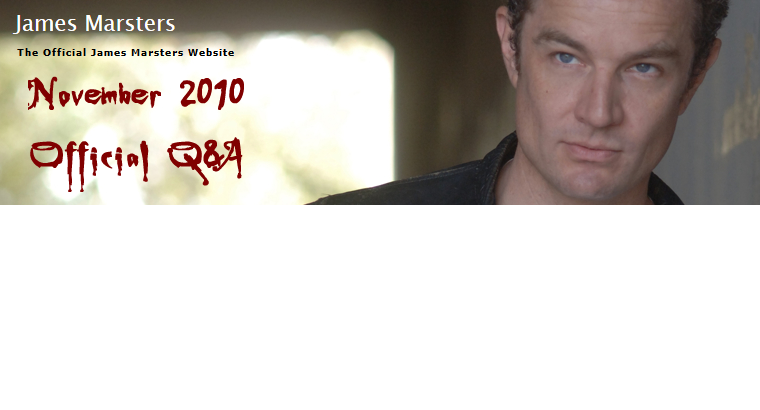 What was the first song you ever remember playing really well on the guitar?
“Fire and Rain” by James Taylor. From early on I was a James Taylor addict and I sounded a lot like him. I never found my real voice until I started writing my own songs and I didn’t have to sound like anybody else anymore.

Why do you think Angel ended that way it did?
Because I think Joss wanted to make all those characters heroic, but it’s not in his mindset to do that overtly. He couldn’t show onscreen the characters becoming the heroes that they were. He had to allude to it, he had to let your imagination fill those blanks in. But – the unqualified assumption when we filmed that scene was that we all died and anything I said to Angel in that last scene were based on, “hey man, welcome, I know I’m gonna die with you tonight.”

Does working with a green screen sharpen your skills or make you lazier as an actor?
I’ve never had a problem with green screen because when you’re on stage, you have to do that all the time. You have to look out into the audience and see, you know, a sunset. On stage, you don’t always get all the sets – sometimes it’s just a spotlight and you have to create the world in your mind. So I’m glad I was on stage because it made me very comfortable with that situation. Some actors freak out.

What is the hardest lesson you’ve ever learned?
That I’m not as smart as I think I am, that I am just a fool like every other human being, making it up as I go along, and it doesn’t matter how high my IQ is, I still keep tripping over my own feet.

Are you disappointed in the Obama presidency?
Not at all. I am inspired by the Obama presidency. He has a Congress that is made up of Republican disloyal Americans who are willing to flush America down the toilet just so they can get back in office. They’ve done everything they can to keep the Obama administration from saving us from the next depression. It is basically destroy Obama and if they take down America with them, then fine.