Back in the day, James Marsters' old official websites used to post a monthly Q&A session with James, & I'm reposting those Q&As every week for a bit of fun (& nostalgia)! Enjoy this week's Q&A from December 2010: 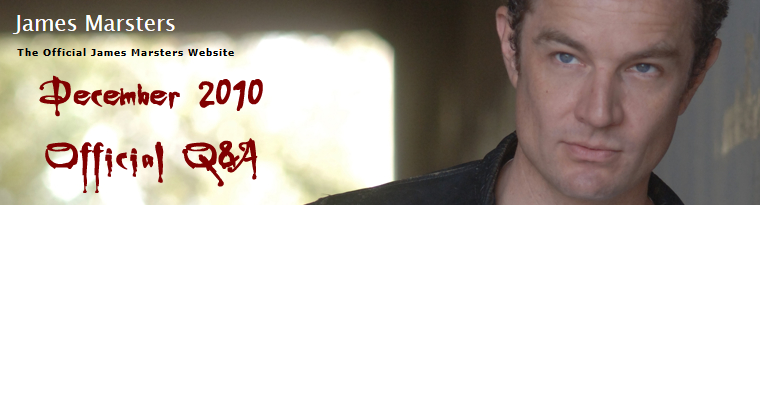 What do you wish you were better as saying “no” to?

Is justice or forgiveness more important?

Do you prefer Stanislavski techniques or more Brechtian and Epic theatre techniques?

It depends on the play.  If you’re doing a play with a fourth wall, which is to say the invisible wall between you and the audience, then Stanislavski is the only one to listen to.  If you’re doing one in which we admit that we’re all in the same room together, then Brecht comes into play, Shakespeare comes into play, and frankly I prefer that.  I want to stare my audience in the eyeball one at a time and say, ‘hey baby, we’re both in the same room together. Let’s be dangerous.”  I don’t like the fourth wall.

While in England have you ever pulled out an English accent just for kicks?

Once, but it wasn’t in England.  My girlfriend at the time and I were in Canada and we decided just for kicks to adopt an English accent as we walked through a mall to see what happened. We got invited to five parties. Everyone who met us thought we were the coolest people.  But we didn’t go to any of them because we couldn’t keep the lie up. (giggles)

Is there anything in your house that has sentimental value? (no cheating and saying your kids!)

(thinks a minute)  No.  No, material things are replaceable, even my guitars.  If there was a house fire, and I got my kids out, but the guitars burn?  That’s okay. The closest thing I can think of is my guitars, but if I really think about it?  Ehh, I could get another guitar.

I know that you must be extremely proud of your songs but I just wondered if you had ever thought, “Damn I wish I’d thought of that.”

No.  I can only think of the things that I think of.  I can’t be jealous of other people’s lives.  I am blessed with my life and I have to write about that one,  I don’t envy Jimi Hendrix, or Tom Waits. I’m very happy to be me and how to express how it feels to be me.

Are you a pillow flipper? (prefer the cooler side)