Back in the day, James Marsters' old official websites used to post a monthly Q&A session with James, & I'm reposting those Q&As every week for a bit of fun (& nostalgia)! Only a couple if these babies left to post! Enjoy this week's Q&A from January 2011: 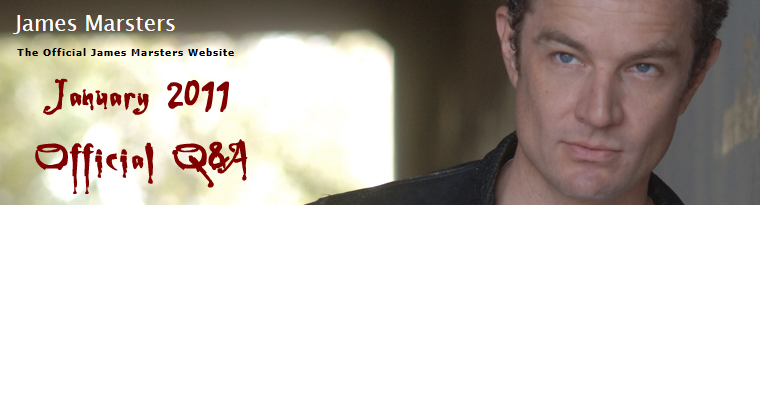 Having run your own theater, you’ve come up against the conflict of arts promotion vs financial viability. Having had to promote both agendas at once, which do you feel drives the creative spirit at the end of the day?
They must be the same. Moliere and Shakespeare realized this. You have to grab the audience by the throat and if you have something important to say, once you have them by the throat they’ll listen. But they have to be your slaves – there should be zero difference between a theme that is important and true and that which is commercially viable. One should lead to the other. A great artist can take a great theme, whether it’s pain or wisdom or whatever and they make it so exciting to watch, that is art. I remember trying to sell “Life is a Dream” a 500 year old play in verse from Spain and nobody knew it, but it’s better than Hamlet. And I sold it as a sex romp. I got full houses on a 500 year old play.

Was there a teacher or teachers that made a difference in your life?
Mrs. Barr. She was my senior English teacher in high school and she was BRUTAL about teaching us the language. She made us learn words and to this day I have a good command of the language because of all the words that she taught me. There was an 8th grade math teacher who was a total hippie. He had long hair and a beard and I thought he was the coolest guy on earth. I was not good in math but he made it fun. My high school chemistry teacher was the first person I’d met who was part of the actor’s union and he took pity on me. By that time I was getting known as an interesting young actor and he forgave me my weakness in science and sheperded me through chemistry. Mr. Stewart was his name.

What talent do you wish you had?
Wow…uhm. Fencing! (laughs) I don’t know. I have all the talents I want. I’m blessed.

If Capt. John Hart and Spike ever crossed paths, what do you think the outcome would be?
Wild homosexual sex! Because Spike hasn’t had homosexual sex in like 100 years, and Captain John is so sexy, you know?

In P.S. I Love You, where she’s contemplating on what kind of career she should go into, one of her choices was being a ‘Vampire Slayer’, was that added in there because you were on Buffy or did it have nothing to do with you being on the show?
(Laughs) It had zero to do with my being there. I was just along for the ride on that one. I was just taking notes.

Star Trek character? Spock! I told Joss when I got on Buffy that I wanted to be the Spock of Buffy. There’s only one letter of difference, man! I wanted to be the side character that is interesting, and takes the theme and turns it on its head so you can re-examine it from a different angle.

Album from your youth? Hmmm…Tom Petty – Damn the Torpedoes.