Back in the day, James Marsters' old official websites used to post a monthly Q&A session with James, & I'm reposting those Q&As every week for a bit of fun (& nostalgia)! This is the penultimate Q&A only 1 left! Enjoy this week's Q&A from February 2011: 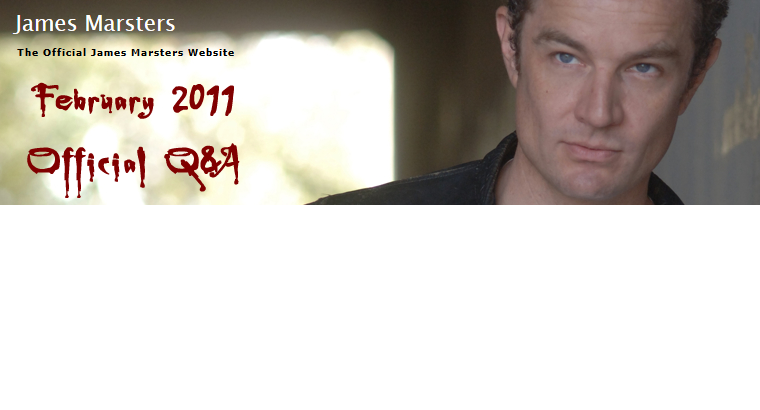 What are your idiosyncrasies, quirks? We all have them…
I’m a weirdo, I’m a definite weirdo in general. But I can’t think of anything specific that would make me so. I’m not really obsessive compulsive about anything – I’m just glad to get through the day, man. Yeah…

You have told your fans to be kind to one another, that we are all human beings, and we all want to feel connected. What makes you feel connected to humanity, besides acting and what motivates you to be kind to others?
Political rallies and any art. I think the function of art, more than any other, is to remind us that we are not alone. The artist creates a work that is a very personal expression of his or her own experience. And if the artist is successful they tap into something other people feel as well. So when the public responds positively to the art, the artist doesn’t feel alone anymore, and the audience, noticing the other audience members reacting similarly to this piece of art, doesn’t feel alone anymore. So when a really wonderful piece of art that everyone else is gasping about, I feel very much in a group. We’re the only animal that knows we’re going to die, but we’re also the only animal that makes art, which means we can all be a part of something that continues, as David Mamet said. The cave paintings are still with us and whoever that painter was he is still having an effect on the human journey.

Are there any jobs you never wanted to end?
Every single one. I don’t think that it’s worth it to do a job that you want to end. If you’re doing a job and you hope it’s going to end? Quit.

What is your actual memorization process? Big chunks at a time? Someone reads the lines with you? Does it get easier with time or is it always a struggle for you?
My favorite part of acting for television is the memorization of the lines. That is when I am alone in bed and the whole universe is mine to invent. I get to decide how my character feels about the moments and my imagination can just run riot. Because when you get to a set, it all mostly revolves around a prop, or getting the gem to sparkle on your finger just right and it all just becomes a very technical process. But when I’m alone in my room, studying my lines, I feel like a real artist. And that process, because I enjoy it, is a very long one. I’ll take hours and hours. It’s not that I need the time to memorize the lines, but because I’m having fun.

What was the worst movie you ever watched?
I’m lucky. I forget the things that are horrible. I’ve seen enough though, my God. (laughs)

What is the most embarrassing thing you ever had to play, whether it was in TV, a movie or back when you did theater?
The thing is, the things that I was embarrassed about are the things I’m most proud of. I have found that artistically, the best place to be is when you’re highly embarrassed or terrified. If you’re not one of those things, you’re probably not hitting the mark. One, of course, if when I had my professional acting debut at the Goodman Theater and Bob Falls, one of the best directors in America, comes up to me and says “we’re gonna have you buck naked for your entrance.” You could hear a hundred opera glasses click, click, clicking open as I rolled out on stage tied to a large wooden wheel like DaVinci’s Man. It was hilarious.

Favorites:
Motorbike and where would you ride it if you had the time, money and freedom to do so? Harley Davidson. All over the world.
Song on your CD “Civilized Man” and why? Civilized Man had too much synthesized sound and no drummer and that was a huge mistake. It’s hard to listen to any song on that album without some embarrassment. I love playing them live though. Oh man, don’t make me pick a favorite. (laughs)