Back in the day, James Marsters' old official websites used to post a monthly Q&A session with James, & I'm reposting those Q&As every week for a bit of fun (& nostalgia)! Enjoy this very last Q&A from April 2011 (And Happy New Year!!): 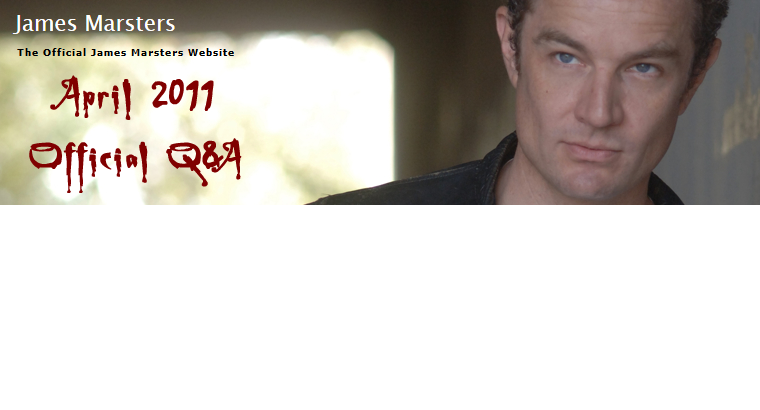 What’s your opinion of Lady Gaga?
I think she’s very brave.  I think she’s got a lot of good ideas. I think that I’m happy that she has the pop culture attention right now.  I think that she’s very interesting, very intelligent.  I don’t know that her musical style is exactly what I would tend to listen to, uh, it’s more dance stuff. But I do respect her ethos,  I do respect her point of view, I just don’t listen to that, I don’t listen to her music.  But every time I see her in an interview I think, “man, she’s a lot better than Christina Aguilera.”  Nothing against Christina Aguilera, but she wasn’t quite so intellectual when she had the spotlight.

What’s the worst injury you’ve ever had and was it self-inflicted?
Yeah, I’ll show you!  (pulls up pants leg showing a very large horizontal scar circling around his leg just under the kneecap)  This was when I was in fifth grade and I was playing “hotbox” which is a version of baseball where the runner is caught between two bases and the two basemen try to throw the ball in between to throw them out and – it’s also called “pickle” sometimes – and I was playing it on a hill and I was sliding to be safe downhill and I caught a stand-still sprinkler head that was in the ground and it ripped my leg two-thirds of the way around – all the flesh, the fat, everything down to the bone two-thirds of the way around, so I was only left with “that much” to hang on to (shows the size with his fingers).  Basically, my calf slid down the bone like a sock and just hung open like that (shows with hands).  I’ll never get the image out of my head.

How did you get from the place of injury home or to a place with a medical center?

They called an ambulance.  I was in Oakland and they called an ambulance and I spent a month in the hospital in Oakland and then I was released home, but then got an infection…no, then they thought it would heal, tried to have it heal and that took about another year, but it didn’t heal so I needed a skin graft and during the skin graft it got an infection, a staph infection.  So I was off my foot, my leg for a full year and a lot of people said I wouldn’t walk anymore and I always said my brain said, “yeah right” I always knew I was going to walk again.

If someone’s underwear was showing would you tell them?
(giggles) No.  It’s kinda sexy when someone’s under… wait, male or female?  With a female, uh, no, I don’t think so because half the time I think it’s intentional – with guys too.

Are the beds on TV as comfortable as they look?
Yeah.  You don’t have to actually sleep in them so I guess it’s hard to really know.  But they tend to be some cheap mattress that they have in a closet somewhere and with either a nice sheet or not a nice sheet.  Yeah, basically when you’re filming it’s like factory work so you’re standing on concrete and there’s dust everywhere so when there’s a nice clean bed with fresh sheets it is pretty nice.

Emotion?  Exaltation.  By the way, when a group of small birds take off in flight at the same time, that is called an exaltation of birds.  I think it’s a good description of what the heart does at that point.

And that's all she wrote! I hope you've enjoyed this wander down memory lane with me! If you've missed any, or get hit in the nostalgia & wanna revisit any, hit the above link & take another wander. They'll all remain there for your perusal, anytime you want.