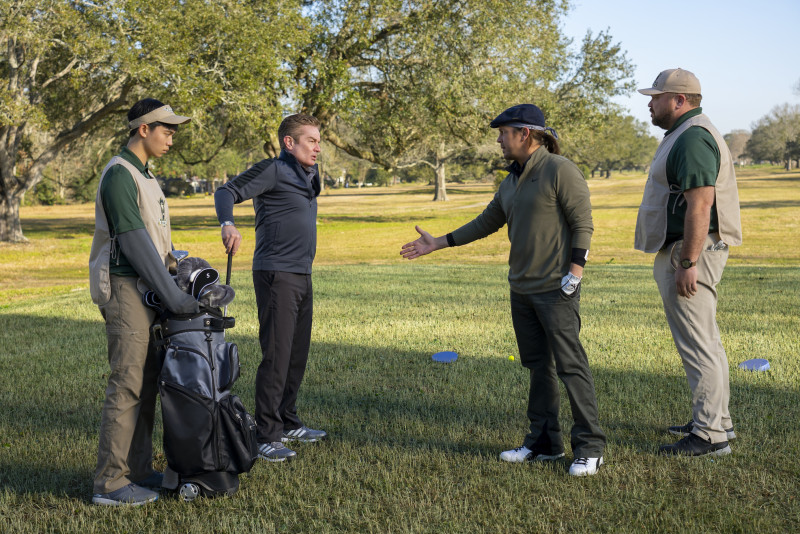 Wyle’s wife Sara Wells appears in Episode 12, “The Golf Job,” as Jennifer, a bubbly clerk at a golf club’s pro shop. Hitter Eliot Spencer (Christian Kane) will use his charm to get information from her to help him and Jack Hurley (Drew Powell, reprising his role from the original series) with their con. In this episode, an old friend’s visit sparks a self-doubting Harry to uncover an unlikely client on the links at his exclusive golf club. (This episode also features the Angel reunion for Kane with James Marsters.)

ETA 9/9/21: James' episode is now confirmed to be #1.12 "The Golf Job," which will be the fourth episode of 1B. Leverage's Christian Kane Teases Angel-ic Reunion With James Marsters | @TVLine

ETA 9/9/21: Trailer for Leverage: Redemption 1B! No James sadly, but there is a hint of Christian from the episode James guest stars in!

ETA 27/8/21: The second half of Leverage: Redemption (ie the half with James Marsters' episode!) will drop October 8 on IMDbTV!!

We tried to send you the date when #LeverageRedemption is returning to @IMDbTV, but it got hacked, punched, pinched and trashed. Track your package with the help of this video. pic.twitter.com/A6hfkbtKSZ

ETA 8/7/21: Turns out James Marsters episode won't be in the first bunch of 8 premiering this Friday July 9, it'll be amongst the second bunch of 8 episodes being released sometime in the fall.

When James Marsters appears on Leverage: Redemption with Christian Kane, is it too much to hope for a couple of inside jokes or nods to their previous “lives” on Angel? –HtotheB
Hope away, because it sounds like that episode (which is one of the eight not arriving until fall) will be rather… angelic. “I mean, we may have done a couple of Easter eggs in there for the fans, to be honest with you…,” Christian Kane shared with me. “We were always trying to kill each other [on Angel], and we did that this time really, really subtly, with different hats on.”

ETA 29/6/21: IMDbTV are releasing the first eight of 16 episodes on Friday July 9, per TV Line. So look for James' episode amongst the end of that bunch! (Still no confirmation on James' episode number or title, but given when it was filmed, it's likely to be one of the later ones, maybe 7 or 8)

ETA 28/5/21: If you're in Canada or Germany, you'll be able to check out James in Leverage: Redemption through Bell Media in Canada and Mediengruppe RTL Deutschland in Germany. No details on a release date as yet (it may coincide with the US release, but 🤷‍♀️).

Hey Germany & Canada, you got #LeverageRedemption!! Check it out! https://t.co/zsDrlirA0Q

ETA 27/5/21: Check out the full length trailer for Leverage: Redemption! Again, no James that I could spot, but (again) still awesome anyways!

ETA 4/5/21: Check out the first trailer for Leverage: Redemption (no James that I could see, but still pretty awesome!), which also reveals the new series will premiere July 9 on IMDbTV!