Jamie's note #1: James' episode (in which he plays Carl, "a slick country club hustler who uses his conning of wealthy members to fund a much darker criminal enterprise") is now confirmed to be #1.12 "The Golf Job," which will be the fourth episode of 1B.

Jamie's note #2: The article below states you can 'Watch Kane & Marsters get punchy towards the end of this trailer,' however, it is clearly not James in the trailer, so I think they've confused him with someone else. And given how gung-ho both James & Christian are about doing their own stunts, I don't think it's a stunt double for James either. But I could be wrong as James did have knee surgery around abouts the time of filming this. Either way it's definitely not James in the trailer, which you can confirm for yourself by clicking the screencaps below of definitely-not-James (I'm quite certain that isn't his name, but for my purposes it'll do): 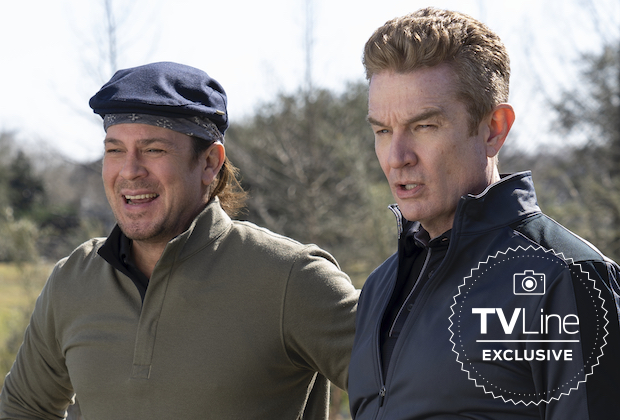 Two Angel alumni had a devil of a time when they reunited on IMDb TV’s Leverage: Redemption.

As TVLine exclusively reported a while back, Christian Kane’s Eliot will aim to thwart foul play on the fairway when James Marsters guest-stars as Carl, a slick country club hustler who uses his conning of wealthy members to fund a much darker criminal enterprise.

“We may have dropped a couple of Easter eggs in there for the [Angel] fans, man, to be honest with you…,” Kane teased for TVLine.

Marsters specifically appears in “The Golf Job,” which is the fourth of the eight new episodes being released on Friday, Oct. 8, thus concluding the revival’s 16-episode freshman run.

Kane said that Marsters was “a bit wary” of traveling to New Orleans during the middle throes of the pandemic, so he and Leverage newcomer Noah Wyle, who directed the episode (and previously did a play with Marsters), hopped on the phone together to tender the offer.

“He said yes, and it made our day,” Kane recalled. “It was so fun, because he’s been a dear friend of mine — one of my first friends in Hollywood.”

“Everybody’s so scared of Spike, this scary vampire, but in real life James is one of the biggest pussycats you’ve ever seen,” Kane added. “He’s just a cool, cool guy, and such a nice guy at heart.”

Kane promised that those in the Angel/Leverage Venn diagram are “going to get a kick out of this” reunion, even though he and Marsters are playing different characters. That said, “there are going to be a lot of times where you’re looking at Spike and Lindsey.

“You’re always looking for Spike to go after Lindsey, and vice versa. We were always trying to kill each other,” he noted of the Angel duo’s dynamic. “And we did that this time really, really subtly, with different hats on.”

IMDb TV is Amazon’s free streaming service, on which you also can currently watch the original Leverage series.