After discovering their parents are super-villians in disguise, a group of teenagers band together to atone for their parents’ actions in the plat of the new Marvel show on Hulu called, “Runaways.” James Marsters is one of the stars and is best known for his role as the British Vampire “Spike” on “Buffy the Vampire Slayer” and “Angel.” 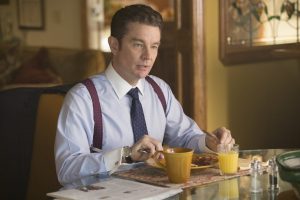 Marvel’s Runaways has a team of teenage superheroes fighting the villain every kid wants to battle: Their parents. Only for the Runaways, their parents actually are evil members of The Pride. Fan favorite James Marsters plays Victor Stein, the abusive father of Runaway Chase Stein (Gregg Sulkin).

Singer, songwriter and actor James Marsters has played many a bad guy in his career but first found international fame playing the platinum-blond, punk-goth, Brit vampire ‘Spike' in Buffy the Vampire Slayer and the equally popular spin-off, Angel. He also played ‘Brainiac' in TV’s Smallville and has had roles in Without A Trace, Millennium, Saving Grace, Caprica and most recently Warehouse 13, Supernatural and Hawaii Five-O. His movie credits include P.S. I Love You, The House On Haunted Hill and Chance.

Marsters latest role puts him into the Marvel Cinematic Universe in Marvel’s newest series 'Runaways', premiering on Hulu. It’s the story of six teenagers from different backgrounds who unite – against their parents!

The first three episodes will premiere on Tuesday, November 21 and stream on Hulu thereafter.

‘Marvel’s Runaways’: Ever Carradine and James Marsters on the Child-Parent Dynamic

From showrunners Josh Schwartz and Stephanie Savage, Marvel’s Runaways, available to stream on Hulu, tells the story of six teenagers – Alex Wilder (Rhenzy Feliz), Chase Stein (Gregg Sulkin), Karolina Dean (Virginia Gardner), Nico Minoru (Lyrica Okano), Gert Yorkes (Ariela Barer) and Molly Hernandez (Allegra Acosta) – who realize that their parents have been lying to them all their lives and that they’re really evil. As a result, this group of estranged friends, who also have secrets of their own, must band together to stop their parents before it’s too late.

This segment aired on the KTLA 5 Morning News Show on Wednesday November 22nd, 2017.

JAMES MARSTERS Masters Yet Another Anti-Villain On MARVEL’S “RUNAWAYS”

Every so often, an actor comes along who is so convincing that they can truly suspend disbelief to the extent where the audience is shocked to learn that the performer is in fact nothing like the character, and while the chameleon of an artist James Marsters has sucked viewers into worlds where he has shape-shifted into the likes of vampires, warlocks, and super-villains without ever missing a beat, it is the flawless British accent that he can possess that quickly sends fans jolting into reality when they hear him speak without it. Yes, it’s true; Spike from “Buffy The Vampire Slayer” does not really have a British accent! And just when you can begin to wrap your head around that, it turns out that the actor playing his new on-screen son on “Runaways,” Gregg Sulkin (another star covered by Wingman Magazine!), is British- and has fooled even Marsters with his impeccable American accent! Looks like it would have been easier to believe that they were vampires and werewolves, respectively!

Modesto-raised actor James Marsters is no stranger to being part of big pop culture fandoms. After all the Davis High School graduate is a veteran of the cult shows “Buffy the Vampire Slayer,” “Torchwood” and “Smallville.”