Man, people on Instagram constantly feel the need to comment on how "old" or "young" James looks in the pics I post. Maybe I should start captioning them with his age when the pics were taken. Like, this one would be: James Marsters, aged 39.

The actor talks about acting, and Spike 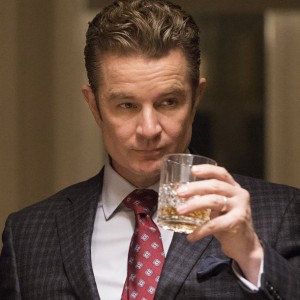 In Season 2 of MARVEL’S RUNAWAYS, now streaming in its entirety on Hulu, the title characters have grown into their group moniker. Teenagers Alex Wilder (Rhenzy Feliz), Chase Stein (Gregg Sulkin), Gert Yorkes (Ariela Barer), Karolina Dean (Virginia Gardner), Molly Hernandez (Allegra Acosta), and Nico Minoru (Lyrica Okano) all have superpowers and/or extraordinary skills. Once alienated from each other, they’ve bonded upon discovering that Pride, the organization all of their parents are involved in, is evil and has a sinister agenda. The runaways have fled their privileged homes and are now hiding out in a mansion buried under Griffith Park in Los Angeles.

Not surprisingly, most of the runaways’ parents are freaking out and trying to find their offspring at the beginning of Season 2. Not so Victor Stein, played by James Marsters, Chase’s brilliant but abusive father. In Season 1, Victor had a brain tumor. This was cured by Pride founder Jonah (Julian McMahon). The cure made Victor at first extremely mellow, then extremely aggressive. Victor was finally shot by his wife Janet (Ever Carradine) to stop him from possibly killing Chase. So Victor starts Season 2 in a coma.

One major hint that Victor will come out of the coma at some point is the fact that Marsters is on the Pride headquarters set for a RUNAWAYS Q&A session. The actor has had many roles in films and television, but he’s perhaps still best known for his run as the vampire Spike in BUFFY THE VAMPIRE SLAYER and ANGEL.