Back in the day, James Marsters' old official websites used to post a monthly Q&A session with James, & I'm reposting those Q&As every week for a bit of fun (& nostalgia)! Enjoy this week's Q&A from April 2007: 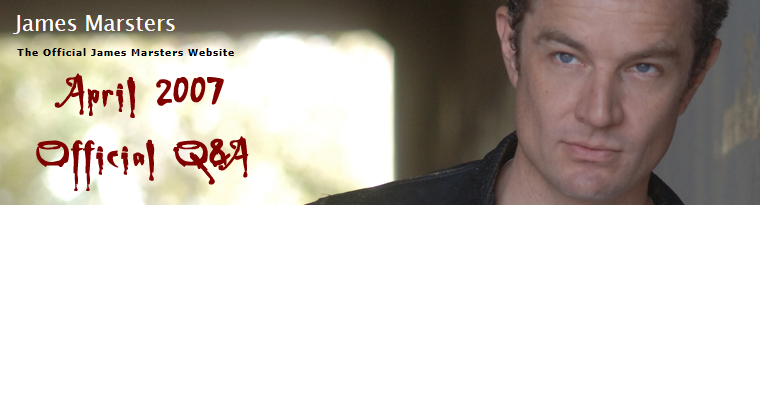 What book do you have on your bedside table at the moment?

I have The Universe in a Single Atom by the Dalai Lama. I’m not a Buddhist, but that is one smart monk!

Derek Jacobi has said that “To be or not to be…” is not a soliloquy but Hamlet speaking to Ophelia, partly because what he describes happens to her. What are your thoughts on this interesting view?

Hmmmm, that’s really interesting, give me a second. I don’t think that it is entirely realistic that Ophelia wouldn’t speak if that were true. It is a scene by itself and in itself and usually in these scenes if a character is present they have one short line. You could play it that way, but I don’t see the need to eradicate the soliloquy – I love soliloquy.

Do you have to hunt for your keys every day or are you one of those people who always put them in the same place when you come in?

What’s better: old friends, or new friends, and why?

Old friends – they know where all your sticky places are and still like you.

Spike’s wardrobe was strongly associated with your formation of his character; yet in your recent Macbeth production, you brought Macbeth alive in black jeans and teeshirt. How important, then, is wardrobe in storytelling? Don’t clothes help you find a character or are you totally floated by the words alone?

In stage you don’t need costume. Shakespeare himself dressed his actors in the jeans and t-shirts of his day, depending only on small props and costume pieces to define his kings and warriors because on stage the words are everything. On film the words are at best equal to the image and sometimes secondary, so the costume becomes very important for TV and film – which is why it irked that we could only find one costume that worked – grungy rocker is not that hard to costume.

What’s the first thing you think about when you get up in the morning?

I’m training myself to think that it’s a new, good day full of would-be possibility. I need these thoughts because I feel like crap in the morning.

Steven Dietz, a playwright I worked with in Seattle. He had a combination of love and confidence that made actors just melt in his hands. Michael Winters – a stage actor in America. There is no finer than him. Hearing his words is like being blessed by an angel. Laird Williamson, who now works for the Denver Center, was so strange in the way he gave direction that he gave his actors permission to try anything. A true genius.

And it's not just Android users, sorry! It's also available on iOS, AppleTV & via web browser! Those lucky Dutch!

If you're heading to @NY_Comic_Con & looking for an individual guests schedule &/or pricing, check this out 👇👇👇https://t.co/HoTiU56wfL#NYCC #NewYorkComicCon #NYCC2019 #NYComicCon