Back in the day, James Marsters' old official websites used to post a monthly Q&A session with James, & I'm reposting those Q&As every week for a bit of fun (& nostalgia)! Enjoy this week's Q&A from August 2007: 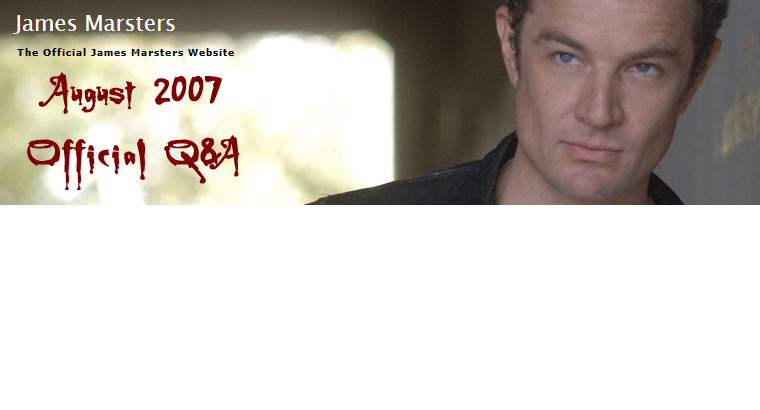 Is there a particular George F. Walker character that you would like to play?
I’d like to play the bum character in Criminals in Love. He is so bitter and so wise and so loving. A great combination that I’ve never seen written so strongly.

How much of your time, when not filming, do you spend thinking of your characters? Do you spend time creating back-stories, etc?

Do you agree that all is fair in love and war?

No, nothing’s fair in love and nothing is fair in war. That’s why you should avoid wars at all times and avoid love until you are absolutely ready.

What’s the best decision you ever made?

To become a father. That sounds like something that a parent has to say, but it’s really true. I don’t feel like I was really myself before I was a father.

Other than the Macbeth project, do you have any personal ambitions that you haven’t fulfilled yet?

Run for political office. I think that I’m good at talking people into my agenda. I think I have some good ideas about saving our country and I really don’t mind fighting dirty. I’d make a great President, but I would be impeached so fast. I would be too passionate and too honest and too naive. I would be the worst of Howard Dean and John McCain rolled into one.

What are your thoughts on country music?

Country music has a beautiful tradition but has recently lost its way in a commercial bog. It sounds more these days like pop music. I prefer the older stuff before anyone was making any real money; Waylon Jennings, Loretta Lynn, Hank Williams, Willie Nelson – stuff like that.

Either/Or:
Leno or Letterman? – Letterman, my God. Leno seeks to offend no one and so he bores everyone. Letterman is angry at everyone and he entertains me.
Chocolate or Vanilla? – Chocolate – it’s directly connected to sex.